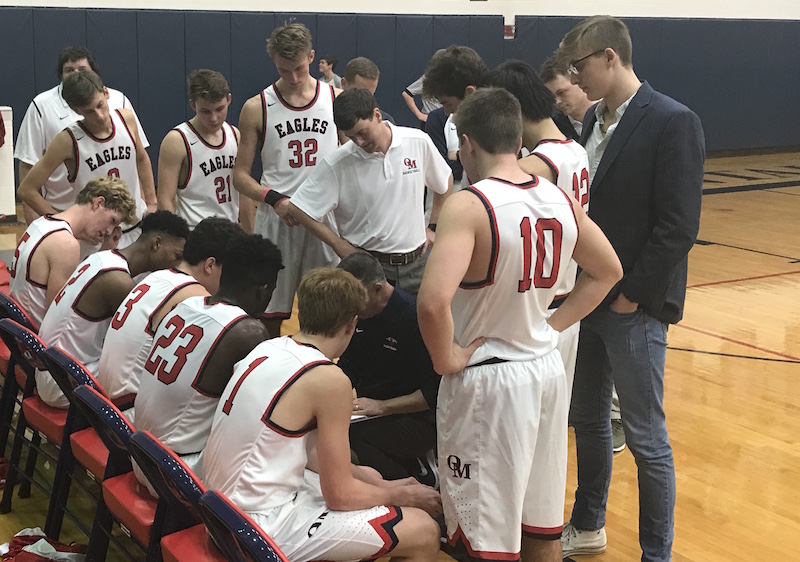 Oak Mountain was able to pull together as a team thanks to seven players scoring, as the Eagles held on for their fifth straight win with a 44-37 victory over Chelsea. (Reporter photo/Alec Etheredge)

NORTH SHELBY – A 280 basketball rivalry and the battle of Double Oak Mountain was renewed on Tuesday, Nov. 28, as Chelsea traveled down 280 to take on the Oak Mountain Eagles in a county matchup.

While the Hornets made a strong run in the third quarter to make it tight, Oak Mountain (5-1) was able to hold on for a seven-point 44-37 win to pick up its fifth consecutive victory.

“It’s a fun rivalry, but I think both sides handle the rivalry well,” Oak Mountain head coach Chris Love said after the thrilling win. “It’s always a dog fight every time we play them. It’s fun to play teams that are close by like that.”

As expected, the two teams came out sprinting on both ends of the court as they do every year.

Nathan Jones, who knocked down the game-winning free throw over Mortimer Jordan the night before, got things started for the Eagles with their first four points to continue his strong play.

Matthew Lanzi and Josh Hanna matched those baskets for Chelsea (3-3) to square things up at 4-4.

Neither team created much distance for much of the opening frame, but the Hornets eventually grabbed a 10-8 lead thanks to a Daniel Washington offensive rebound and put back.

The Eagles, however, responded with a 7-0 run to end the quarter behind a Drew Dunn 3-pointer, who was 0-4 up to that point, and two layups from Zach Nelson. The quick spurt at the end of the quarter gave Oak Mountain a 15-10 advantage heading to the second period.

For the most part, the second quarter was farely uneventful as Oak Mountain had outscored Chelsea in a low-scoring quarter, 7-6. That was until there were just a couple of seconds left on the clock.

The Eagles got a rebound with 30 seconds left on the clock and held for one final shot in the quarter. With the Chelsea defense keyed on Dunn, arguably Oak Mountain’s best shooter, Luke Jasinksi got the ball, faked into the lane, stepped back and drained a 3-pointer at the buzzer for a 25-16 advantage.

“We were awful defensively at the start of the year against Pelham, but we’re getting better,” Love said of the defensive performance, specifically in the third quarter. “They’re a tough team to guard and I think we handled it well tonight.”

Both teams came out with a bit more fight in the third quarter and it led to several flops, some chippiness, players sliding on the floor and both student sections yelling back and forth at each other.

Chelsea grabbed the upper hand in the period thanks to back-to-back baskets by Washington, which gave the Hornets an 11-5 run in the quarter as they trailed 30-27 heading to the fourth.

Oak Mountain responded with its own spurt at the start of the final frame with a quick 6-0 run in the first 2:52 of the quarter.

The rest of the way was nothing but fouls as the chippiness and hard-fought game continued. The two teams combined to shoot 22 free throws in the fourth quarter, 16 of which came from Oak Mountain.

The Hornets made all six of their free throws, but the Eagles also hit 12 of their 16 down the stretch, which is all they needed to preserve the 44-37 win.

Chris Mayweather led the way for Oak Mountain with 14 points, including 5-6 mark at the free throw line in the final period. He was the only double-figure scorer for Oak Mountain, but seven players scored in all for a balanced attack.

Love said that the defenses over the last five games, as well as the improvement defensively is a large reason for the win streak.

Chelsea was led by 15 points from Lanzi, while Washington added 11.