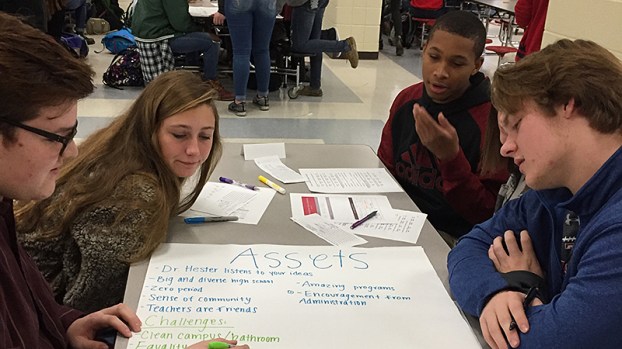 Thompson High School Students take part in a leadership development program at the school on Jan. 4. Alabaster is among the cities listed as having some of the smartest residents in the state. (Contributed)

Residents of area cities among smartest in state

According to data recently compiled by Zippia.com, the residents of Pelham are among the smartest in the state.

The site used demographic data from the latest American Community Survey from the U.S. Census to figure out what criteria about a place would be an indicator of its residents’ intelligence.

Zippia.com is dedicated to providing career insights for recent college graduates, according to its website. “We set upon the percentage of adults (over 25) with at least a college degree and the percentage of teenagers (aged 15-17) that are high school dropouts for the 62 largest cities in Alabama with data,” the site states. “We then crunched the numbers and were left with this set of the brightest cities in the Heart of Dixie.”

For reference, about 30 percent of Americans over 25 have graduated from college.

Two Shelby County cities made the top 10 list. With 11,386 residents, the city of Chelsea came in at No. 2 on the list. Adults with a college degree make up 44.65 percent of the population and it has a high school dropout rate of zero percent.

Pelham came in at No. 5 on the list with a population of 22,346. According to the website, 36.8 percent of adults in the city have a college degree and the high school dropout rate is zero percent.

According to Zippia.com, the least smart places in Alabama are Albertville, Bessemer and Atmore.

Shelby County was recently named the healthiest county in the state of Alabama by a national website. According to the... read more