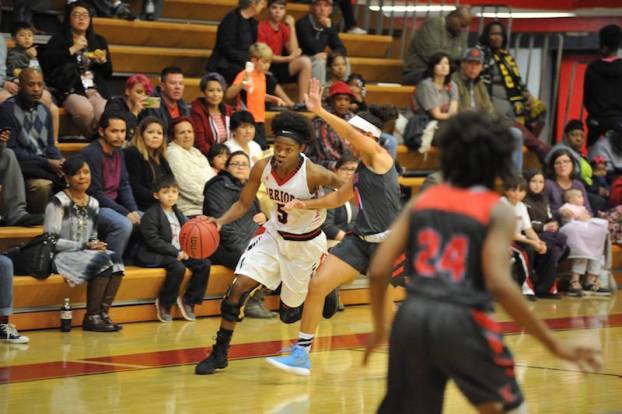 Thompson fell 62-29 to Hillcrest-Tuscaloosa at home on Tuesday, Nov. 28, as the Warriors till look to come together early in the season. (For the Reporter/Larry Dancy)

ALABASTER – A tough night shooting and turnovers lead to a loss for the Thompson girls basketball team to the Hillcrest-Tuscaloosa Patriots on Tuesday night, Nov 28, 62-29.

The Warriors (2-5) were hounded by an aggressive Patriot defense the entire evening giving up 26 turnovers and scoring only 15 points after the first quarter.

The opening period was a bright spot for Thompson as Kahyanne Bolton caught fire scoring the final six points to draw the Warriors within a point at 15-14.

Thompson took their first lead on a pair of free throws from Brooklyn Oden to open the second quarter, but it would be the only lead they would see for the rest of the game.

Baskets were hard to come by from there on out and to make matters worse Bolton (the team’s leading scorer) got into foul trouble with 4:50 to go in the first half.

Hillcrest took advantage of the momentum and outscored Thompson 18-3 while not allowing a single field goal and forcing 17 turnovers in the half.

The Patriots took a commanding 33-17 lead into halftime, but they weren’t finished.

Hillcrest opened the second half on an 8-0 run on the strength of their offensive rebounding and second chance shots to stretch the lead to 41-17.

Including the second quarter, the Warriors didn’t record a single made shot for over 12 minutes.

Cierria Cunningham led the way for the Patriots with 14 points as nine of Hillcrest’s players scored on the night, including four players with at least eight points.

Thompson will look to get back on track when they host the Homewood Patriots this Thursday, Nov 30, at 6 p.m.

By SETH HAGAN | For the Reporter  ALABASTER – The Thompson Warriors hung tough, but were ultimately outmanned by Hillcrest-Tuscaloosa... read more