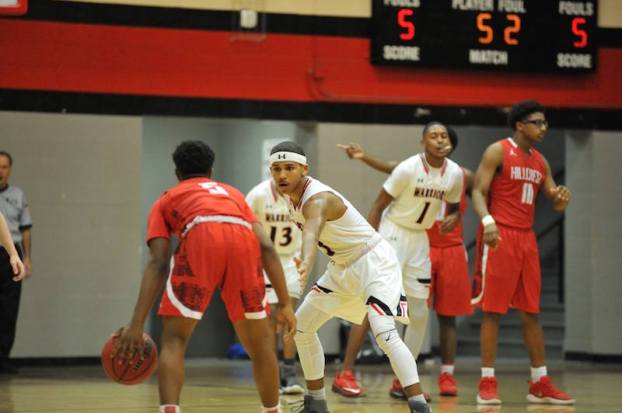 Despite falling to 0-7 on the season, the Thompson Warriors boys' basketball team showed improvement against Hillcrest-Tuscaloosa. (For the Reporter/Larry Dancy)

Thompson’s young roster had a few new additions from the varsity football team, but head coach Kelly Cheatham explained the upgrade in athleticism also comes with a learning curve concerning the team’s overall knowledge of the offensive and defensive schemes.

“It was execution on our part,” said Cheatham. “The new guys are trying to find their niche and where they fit in. You would think it would help, but sometimes it kind of upsets the chemistry. I think after they get a couple of games under their belt they’ll be able to help us a lot more than they did tonight.”

Thompson (0-7) struggled to score in the first half as the Patriots forced the ball to the perimeter, shutting down the inside.

The Warriors only connected on five baskets before halftime and didn’t make any trips to the free throw line, but were able to keep Hillcrest from pulling away despite a significant height disparity.

Down 23-11 at halftime the game’s tempo turned up in the second half. Hillcrest’s Christian Jones had his best quarter in the third scoring six of his team-leading 16 points (all in the paint) as the Patriots increased their lead to 15.

The Warriors kept pace hitting three of their eight 3-pointers, but continued to be bullied on the inside and on the boards. The Patriots took control with an 8-0 run to start the 4th quarter, but again the Warriors battled back when they could’ve thrown in the towel.

Thompson’s leading scorer Zach Littleton scored half of his 12 points in the final period as the Warriors outscored the Patriots 15-8 the rest of the way. Cheatham knows only repetition in practice will close the gap as the team enters the second quarter of their season.

“We have to work more on executing our offense and our transition offense as well,” said Cheatham. “We left a lot of points out there by not turning their turnovers into points. It all boils down to practice.”

Thompson is still seeking its first win of the season and they’ll get their next chance at home Thursday night, Nov 30 when they meet the Homewood Patriots at 7:30 p.m.