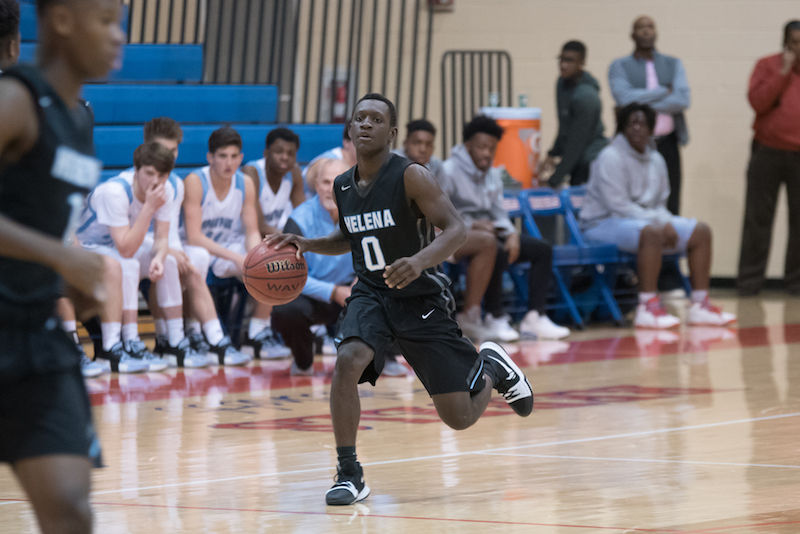 The Helena Huskies are currently 5-0 on the season with all five wins having come against 7A opponents. They came in at No. 6 in the first 6A standings. (Reporter photo/Keith McCoy)

While it’s crazy to think that basketball is already in full swing with the football season just winding down, that’s the case as all of Shelby County’s basketball teams have gotten under way.

If you weren’t aware of that already, the Alabama Sports Writers Association released its first basketball rankings for the 2017-18 season on Thursday, Nov. 30.

With the amount of county teams representing in their respective top 10 or receiving votes, the county is off to another hot start for the second consecutive season.

In the boys rankings, four teams from the county were inside their respective top 10 with one being named the No. 1 team; while two other teams also received votes to be ranked.

That high ranking of No. 1 came from the Vincent Yellow Jackets in the 2A classification as head coach John Hadder has his team rolling in the early going.

The Yellow Jackets are now 4-1 on the season with a tournament championship under their belt at the Ashville Thanksgiving tournament.

Vincent has used several athletes in each contest and has beaten Jacksonville, Ragland, Jemison and B.B. Comer in the early going of the season. The Yellow Jackets’ only loss of the year is to 6A Benjamin Russell 58-46.

Helena, Oak Mountain and Briarwood were also ranked in their respective top 10 when the first rankings were released.

The undefeated Helena Huskies were the highest of those three teams as they came in at No. 6 in Class 6A. Sitting at 5-0 on the season, Helena is the only undefeated boys team left in Shelby County.

The Huskies have gotten off to that fast start thanks to a deep bench of players that can score including Devin Ervin, Nate Andrews, Ben Rose and Deven Tucker, as well as senior leadership from Justin Stuckey and Dionte Tolbert.

Every one of Helena’s victories has come over a 7A team having beaten Robert E. Lee, Spain Park and Thompson once, as well as two victories over a Final Four team last year in Vestavia.

Head coach Chris Laatsch has also picked up his 350th victory in the process of the 5-0 start.

Oak Mountain and Briarwood both have one loss on the season and both came in at No. 9 their respective classification.

In 7A, the Eagles found the ninth spot with an overall record of 5-1. The 2017-18 season didn’t start off with daisy’s and sunshine, however, as Oak Mountain lost its opener to Pelham.

The Eagles did respond strongly from the loss and have now gone on to win five consecutive games over Chelsea, Gardendale and Locust Fork once and Mortimer Jordan twice as they won the 2017 Mortimer Jordan Thanksgiving tournament.

Briarwood also competed in that same tournament over the Thanksgiving break to open its season. Still playing without their football guys, the Lions have gone 3-1 in their first four games including a 2-1 mark in that tournament.

They have wins over Westminster at Oak Mountain, Locust Fork and Moody. Briarwood’s only loss was to an average Gardendale team, but it’s a team that resides in the 6A classification.

Two other teams also received nominations for a spot in the top 10 and those two teams were Chelsea and Pelham, both of whom sit at 3-3 on the season.

Chelsea lost to Vestavia, Talladega and Oak Mountain, none of which are bad losses, and have beaten Shelby County, Gardendale and Childersburg.

Pelham has a win over Oak Mountain at the start of the season and also went 2-1 at the Battle at the Beach tournament over Thanksgiving with wins over Gulf Shores and Spanish Fort.

The Panthers have losses to Alma Bryant, Mortimer Jordan and Hueytown to give them no bad loss as well.