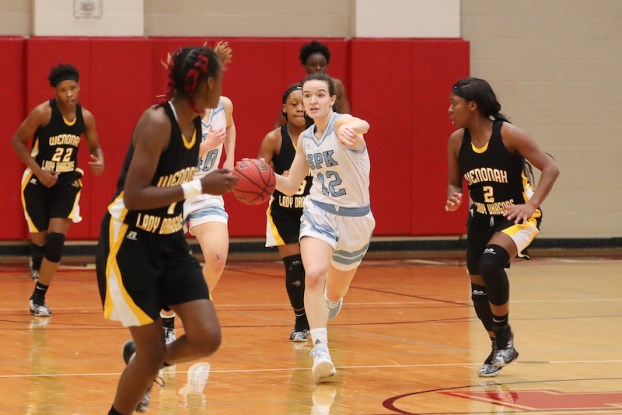 The Spain Park Lady Jags are No. 3 in the 7A classification and the highest ranked team in Shelby County. (For the Reporter/Dawn Harrison)

The girls basketball season has been under way for a couple of weeks and now we have some rankings to pair with that play as the Alabama Sports Writers Association released its first high school basketball rankings of the 2017-18 season on Thursday, Nov. 30.

Coming into the year, Spain Park and Westminster at Oak Mountain were considered two of the strongest teams in Shelby County as both made it to the Final 4 a season ago, while the Jags went into overtime with Hoover in the state championship game.

Both returned pretty much their entire team, which led to the excitement building up during the offseason and in the first poll of the new year each was ranked inside the top 10 of their respective classification.

The only other team actually ranked inside the top 10 was Montevallo, but two others did receive nominations to be ranked as well. Oak Mountain and Calera were those two teams that were left out of the top 10 despite strong records.

The highest ranked girls team was Spain Park, and rightfully so. The Jaguars are off to a strong 5-1 record with a Bryant-Bank Championship already under their belt.

Spain Park lost its first game of the season to Ramsay, but has five straight wins over Oakman, Homewood, Fort Payne, Wenonah and Hewitt-Trussville.

Also in 7A, the Oak Mountain Eagles just missed out on the rankings with a 6-2 overall record. Their defense has been outstanding early in the season, but their offense is still looking to start clicking.

That being said, the Eagles have still played like a top 10 team with wins over Pinson Valley, Vestavia, John Carroll, Pelham, Chelsea and Mortimer Jordan. Their two losses have come by a combined five points to McAdory, which was the difference in them actually jumping into the top 10.

At the 5A level of competition, Calera has gotten off to a 3-0 start with wins over Childersburg, Dallas County and Isabella. They’re on the outside looking in right now, but a few more wins will earn them a spot inside the top 10.

Montevallo has been dominating opponents early in the season and is off to a 4-0 start. They have a 62-10 win over West Blocton, a 69-23 win over Cornerstone Schools of Birmingham, a 61-18 win over Dallas County and a 68-29 win over Isabella.

Westminster is off to a 2-2 start on the season, which doesn’t jump off the page, but they do have wins over Leeds and Jefferson Christian Academy, with their two losses coming to Briarwood and Prattville Christian Academy.