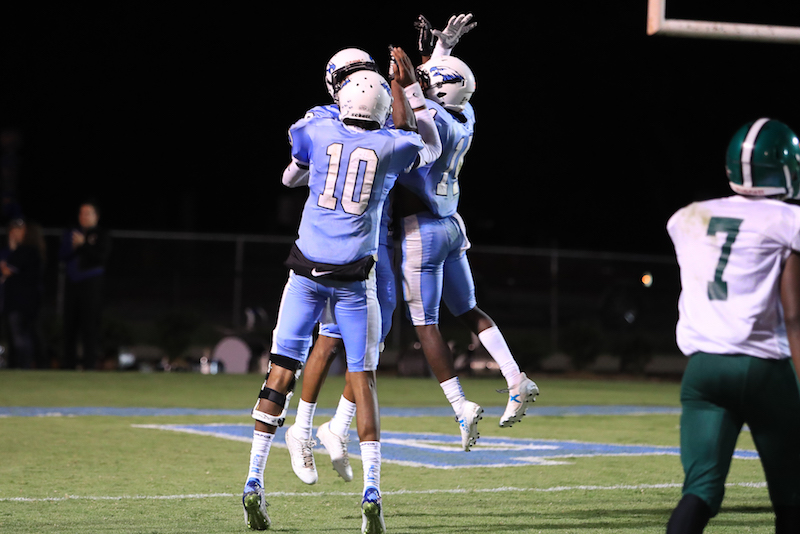 Calera will be making the move from 5A to 6A for the next two sports seasons. There were some big changes in this year's reclassification so make sure to read all of the details. (File)

Link to all reclassification information here

When it comes to football and basketball, we have two huge leaps from two county teams as Calera and Montevallo each made the move up one classification.

The Eagles will move from 5A up to 6A once the 2017-18 school year comes to an end, while Montevallo will make the jump back to 4A, which they are no stranger to doing.

Indian Springs’ boys and girls basketball teams will join Montevallo as they make the transition from 3A to 4A as well. While those were the only three classification changes among county teams in football and basketball, there were some region adjustments in both sports as well.

Link to 7A reclassification and map here

Football: The Thompson Warriors, Spain Park Jaguars and Oak Mountain Eagles will remain in Class 7A, Region 3 when it comes to football. That region will feature the accustomed Hoover, Tuscaloosa County, Mountain Brook and Vestavia. The kicker is the addition of Hewitt-Trussville, which makes the difficult area that much more challenging.

Basketball: Thompson and Oak Mountain will be in 7A, Area 5 with both Hoover and Tuscaloosa County occupying the other two spots in that area. The Warriors remain in that area, while Oak Mountain makes the transition from Area 6, which actually should benefit the Eagles.

Spain Park will remain in a very difficult Area 6 when it comes to basketball where it will compete against Hewitt-Trussville, Mountain Brook and Vestavia Hills.

Link to 6A reclassification and map here

Calera: The big highlight of this year’s reclassification is obviously Calera’s jump from Class 5A into the 6A ranks. It’s an exciting move in basketball where it will compete against three other county teams, but in football it is a very difficult jump.

The Eagles will be moving into Class 6A, Region 3 in football, which features powerhouses such as Opelika and Wetumpka, who spent much of this year in the top 5 of the rankings. Benjamin Russell will also be in that region along with Stanhope Elmore and Selma.

Calera has the most returning talent in the county next year, but that’s going to be a difficult region to handle.

Basketball: This is the exciting change for the county when it comes to Calera’s jump up to 6A. The Eagles will now compete in Class 6A, Area 8, alongside Chelsea, Helena and Pelham. It should make what is already one of the most exciting areas to watch when it comes to basketball in Shelby County and the state that much more thrilling.

Link to 5A reclassification and map here

Briarwood: While Briarwood was close to moving back up to the 6A ranks, the Lions will remain in the 5A classification over the next two years in football, but they will move from Region 4 to Region 5. Their opponents will now be Fairfield, John Carroll, Parker, Pleasant Grove, Ramsay, Woodlawn and none other than their new rival in Wenonah.

Shelby County: There were strong indications and rumors that Shelby County might drop to 4A, but the numbers didn’t add up as it remains in Class 5A. The Wildcats will move to Region 3 in the classification, however.

It’s a region that won’t feature Briarwood, Wenonah or Pleasant Grove, which makes it a tad more manageable. Shelby County will compete against Chilton County, which surprisingly moved down from 6A, Bibb County, Central Tuscaloosa, Demopolis, Jemison and Marbury.

Shelby County: In basketball, the Wildcats will be moving from Area 8 to Area 6. It’s something that makes much more sense geographically and will benefit the Wildcats when it comes to competition.

Link to 4A reclassification and map here

Football: Montevallo is no stranger to the 4A classification, but it still came as somewhat of a surprise that the Bulldogs made the leap from 3A to 4A in the latest reclassification.

Basketball: In basketball, the Bulldogs will see some familiar foes, but some strong competition as they move to Class 4A, Area 8. Montevallo will compete against Childersburg, county foe Indian Springs, Leeds and Oak Grove in the area.

Indian Springs: Indian Springs is making the leap from Class 3A to Class 4A in boys and girls basketball, which will be a difficult transition. It does, however, set up some exciting matchups between them and Montevallo as well as Leeds, Childersburg and Oak Grove.

Link to 2A reclassification and map here

Football: The Yellow Jackets will remain in the 2A classification, but will make the transition from Region 5 to Region 4. It won’t look much different, as many of the same teams will remain in their region such as LaFayette, Reeltown, Fayetteville and Horseshoe Bend. New opponents will be Central Coosa High School and Thorsby.

Basketball: In basketball, Vincent will remain in Area 10, but will be the only remaining team in that area. It will transition from a three-team area featuring Ranburne and Woodland to a four-team area featuring Altamont School, Sumiton Christian and Tarrant. The Yellow Jackets will continue to be a favorite in the area.

Link to 1A reclassification and map here