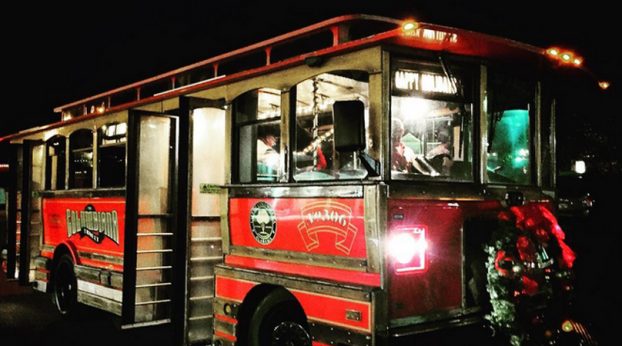 The city's annual "Holly Jolly Trolly" tours are a few of the numerous Christmas-themed events that will be held in Columbiana during the month of December. (File)

COLUMBIANA – Residents in the city of Columbiana are gearing up to celebrate the holiday season with numerous local events throughout the month of December. Mayor Stancil Handley said all of the upcoming events serve to bring the community closer together while getting into the Christmas spirit.

“We’re a close-knit community, and we love doing things together,” Handley said.

The city’s annual Christmas Parade is set for 7 p.m. on Thursday, Dec. 7. Before the parade, the Dream Makers Dance Troup, the cast of the Shelby County High School production of “Elf the Musical” and Mike Mason will provide live entertainment, beginning at 5:30 p.m. Handley will serve as the event’s emcee.

“We include lots of things for the community and our churches,” City Council member Ouida Mayfield said. “And we always make sure to include the schools.”

The parade’s grand marshal will be Columbiana resident Bonnie Atchison. At the end of the parade, Atchison will perform the official lighting of the city Christmas tree, which is located at the intersection of College Street and Main Street.

“I personally refer to Bonnie as the fairy godmother of Columbiana,” Handley said. “We felt like, with all she’s done and all she’s given to Columbiana, we wanted to honor her.”

According to Mayfield, this is the 15th consecutive year that the city has held a Christmas parade. The parade will begin at Elvin Hill Elementary School and trail through College Street, Carter Lane, Main Street and Mildred Street before ending at SCHS.

All floats in the parade are eligible to win one of four titles: Grand Champion, Most Christmas Spirit, Best Christmas Theme and Most Original. The winners will receive trophies during the next city council meeting.

Mayfield asked that no floats throw candy into the crowd for safety reasons. To ensure that kids get their fill of candy, Mayfield said students from Columbiana Middle School will walk alongside the parade to pass it out. Spots are currently open in the parade, and anyone interested in participating can call Mayfield at 305-5256.

On Saturday, Dec. 9. Members of the Columbiana Methodist Church will use the city’s trolley to go caroling in local neighborhoods.

The evening of Thursday, Dec. 14 will involve two events that will allow residents and visitors to celebrate the holidays, learn about Columbiana history and get some Christmas shopping done. During Main Street Columbiana’s Night on the Town event, merchants on Main Street will keep their businesses open from 4-7 p.m.

Columbiana Main Street Director Brenda Sands said Night on the Town will keep visitors occupied while they are waiting to participate in the “Holly Jolly Trolly” tours. Handley, who will also emcee the tours, referred to them as “historical Christmas tours” that originally started to celebrate the city’s acquisition of its first trolley in 2013.

“We go through all of the different neighborhoods and look at the Christmas decorations,” Handley said. “As we’re doing that, I point out historical facts about the city.”

“It’s becoming a family tradition,” Sands said. “We have people call ahead of time asking about it before tickets have even come out.”

Santa is also set to ride through the city on a firetruck on the evening of Friday, Dec. 22. Columbiana Marketing Director Elizabeth Smith said watching Santa ride through their neighborhood is a much-loved tradition for her family and many others.

“My kids have grown up with it, and it’s something they look forward to each year,” Smith said.

For a such a small town, Handley said he’s proud that so many people participate in the holiday-oriented events take place in Columbiana each year.

“We not only live in the city, but we’re all friends,” Handley said. “We’ve got so much Columbiana spirit and we love every opportunity we have to show it off.”