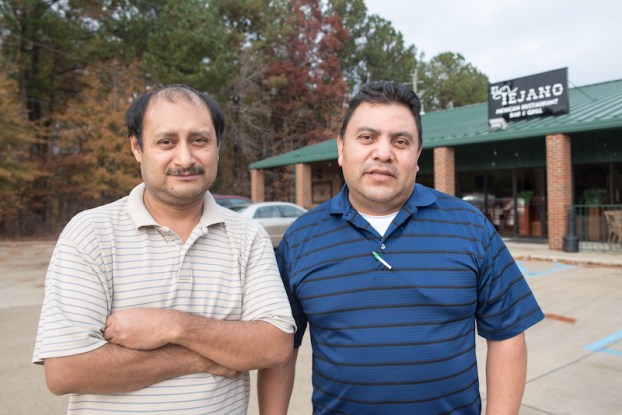 El Tejano owner Antonio Cruz, right, is pictured with one of his cooks in front of the new Mexican restaurant set to open in Helena on Dec. 6. (Reporter Photo/Keith McCoy)

HELENA–A brand new Mexican restaurant offering a wide range of food and beverage items will soon be opening in Helena.

El Tejano Bar and Grill is set to open on Wednesday, Dec. 6 at 4257 Shelby County 52 in the location where restaurants Frankie’s Market Café and the American Ranch House formerly occupied the space.

Owner Antonio Cruz said he has been working in the restaurant industry since the age of 15 and in addition to owning El Tejano, he also owns a fast food restaurant in Atlanta. Cruz bought the space for the Mexican restaurant from the owner of the previous restaurant in Helena.

As far as the food that’s offered, Cruz said he wanted to offer a little bit of everything.

“We have Tex-Mex food but I wanted to put some Mexican food and then some different things too,” Cruz said. “I want to put specials that will give people options.”

The lunch specials at El Tejano will be offered Monday-Friday from 11 a.m. to 3 p.m. with the majority of plates costing $6.99.

The restaurant will also offer carry out orders and can be reached at 881-4026.

Jury rules in favor of developer, against city of Alabaster

By NEAL WAGNER / Managing Editor BIRMINGHAM – A jury in U.S. District Court has ruled the city of... read more