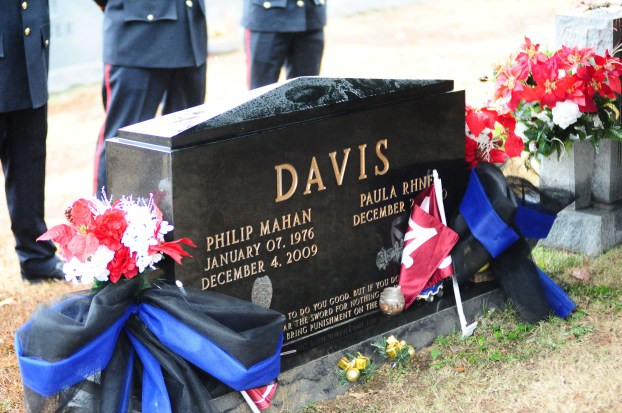 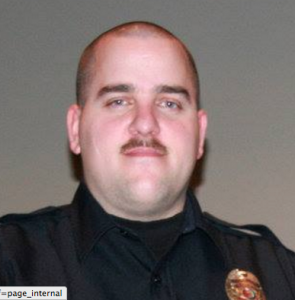 Monday, Dec. 4, marked eight years since Davis was shot and killed during a traffic stop on Interstate 65. Davis was Pelham’s first police officer to be killed in the line of duty.

On Sunday, Dec. 3, a day before the anniversary of his death, a wreath-laying ceremony was held at Davis’ gravesite at Southern Heritage Cemetery at 2 p.m.

Amy Davis, Philip’s sister-in-law, said the support shown to her family after Davis’ death has not waned from year to year.

“Especially in these times, people see that the sacrifice is greater than what they realized,” she said. “People are here to let us know that they haven’t forgotten. It’s not just the family that deals with this, it’s the entire police community and their spouses – everyone has to deal with it in their own way.”

Over the years, Amy Davis said members of the PPD have stepped in to fill the fatherly role in the lives of Philip’s two children. Pelham police officer Adam Schniper recently accompanied Philip Davis’ daughter to her first daddy-daughter dance.

“We have a video of him showing her how to dance and of him putting a corsage on her,” Amy Davis said. “These guys try their best to fill that role whenever they can.”

The pair won the school’s dance contest with their disco routine, according to Schniper.

Amy Davis said she and her family are so grateful for the community’s continued support. In the future, she said some changes will be made to Philip’s annual memorial service.

“We’re trying to find new ways in the future to commemorate the day and honor those still serving,” she said. “We want to turn it into more of a celebration and figure out a way to give back to the community and recognize all of the first responders still out there.”

Shortly after Davis’ death, the city of Pelham renamed the street where the Pelham Police Department sits to Philip Davis Street, and his wife, Paula, made it her mission to help the families of other law enforcement officers who die in the line of duty.

The foundation has provided financial assistance to families, flown families in for funerals and sponsored safety training for first responders.

The foundation hosts the Philip Davis Memorial Golf Tournament each year in May to raise money to fund the foundation’s efforts.

By NEAL WAGNER / Managing Editor ALABASTER – The Alabama Department of Transportation let bids on a project to widen Interstate 65 from... read more