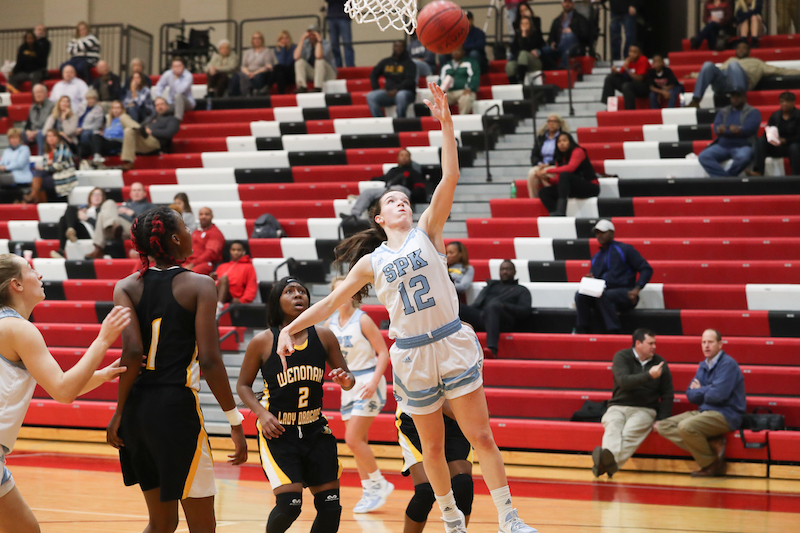 Hoover – Behind 50 first-half points and three double-figure scorers, the No. 3 ranked 7A Spain Park Lady Jags pulled off an 83-14 route of the Pelham Panthers on Friday, Dec. 1.

A total of 37 points of the Jaguars’ 83 points scored came from senior Claire Holt and sophomore Sarah Ashlee Barker. Holt led the way with a game-high 20 points, but Barker was just behind with 17 of her own.

Christen Rushing also got in on the double-digit scoring action posting 11 points thanks to two 3-pointers in the opening period of play.

That opening quarter was what sparked the Jaguars potent offense for the remainder of the night. Although Pelham had its best offensive quarter with seven points, Spain Park more than doubled that total with 23 points in the first to take a 23-7 lead.

Barker, Holt, Rushing and Barrett Herring each had four points or more in the quarter to lead the Jags.

The offensive start seemed to help the team settle in defensively in the second period. It led to SPHS not only scoring 27 more points in the quarter, but limiting Pelham to zero points as well, leading to a 50-7 lead at the half.

Rushing posted all 11 of her points in the first half, while Barker had 11 as well and Holt posted 13. In all, eight different Jaguar players scored in the opening half of play.

While, Barker and Holt continued their strong play into the third quarter, Avery Madison also stepped up adding seven of her nine points in the period.

Spain Park scored 22 additional points in the third quarter and 11 in the final period, while limiting Pelham to five in the third and just two in the fourth.

With the win, Spain Park moved to 6-1 on the season after playing by far its most complete game.

Pelham, who has shown improvement this year, fell to 2-6 having played a very difficult schedule in the first eight games.