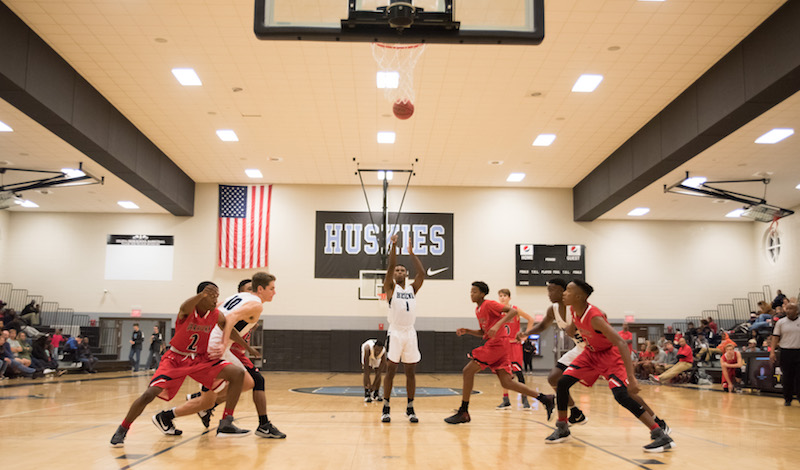 Helena's Justin Stuckey shot 10-10 from the free throw line and had a game-high 16 points to lead the Huskies to their seventh straight win to start the season. (Reporter photo/Keith McCoy)

Chelsea and Helena are both off to strong starts in 2017 as the Hornets continue seeing 10-12 players score a night and the Huskies remain unbeaten.

The two continued their seasons on Monday, Dec. 4, as each played host to home games. Below is a recap of how they fared.

Justin Stuckey had a game-high 16 points, while shooting 10-10 from the free throw line to lead Helena to a 53-42 win over visiting McAdory as the Huskies remained undefeated on the season.

While Helena (7-0) gave up three 3-pointers in the first quarter, they were still able to outpace McAdory to take a 14-13 lead at the end of one. The Huskies went 6-6 at the line and made two 3-pointers of their own to grab the advantage.

The second quarter was the difference in the game as Helena turned up the pressure defensively. The Huskies were able to limit the Yellow Jackets to just four points in the period, while scoring 19 of their own.

Stuckey hit 6-6 free throws in the quarter as he posted 12 of his 16 points in the first half. Ben Rose added six additional points to help Helena take a 33-17 lead into the half.

Helena was actually outscored the next two quarters, 15-14 in the third and 10-6 in the fourth, but the 16-point lead the Huskies had built in the first half ended up being insurmountable for McAdory.

In all, nine different players scored for Helena in the win. Rose had eight, while Caden Pierce and Dionte Tolbert added six apiece.

In a matinee game, the Hornets hosted Tuscaloosa County during school hours at 2 p.m., which always creates for an exciting and intense atmosphere.

Chelsea was able to take advantage of the raucous student section to pick up its second win in a row by taking down Tuscaloosa County 56-44.

After what head coach Nick Baumbaugh said was possibly the school’s best performance in two years against Gardendale, the Hornets came right back with another dominant performance in this win.

The Wildcats got the first basket of the game, but Chelsea responded with a 15-3 run to take control of the game early. Tuscaloosa County made a run to answer and cut the lead to seven, 24-17, at the half.

In the third quarter, Chelsea’s Daniel Washington made his presence known in the post by scoring seven of his game-high 15 points. At the end of three, the Hornets held a 38-26 lead.

Early in the fourth, Chelsea turned several turnovers on the defensive end into points on the offensive end as they went on a 12-4 run to start the quarter and take a dominant 50-30 lead.

The Hornets never relinquished that lead as they held on for the 56-44 win.

Other than Washington’s 15 points, Tyler Coleman added 10 and Sam Towery had eight as Chelsea moved to 5-3 this season.