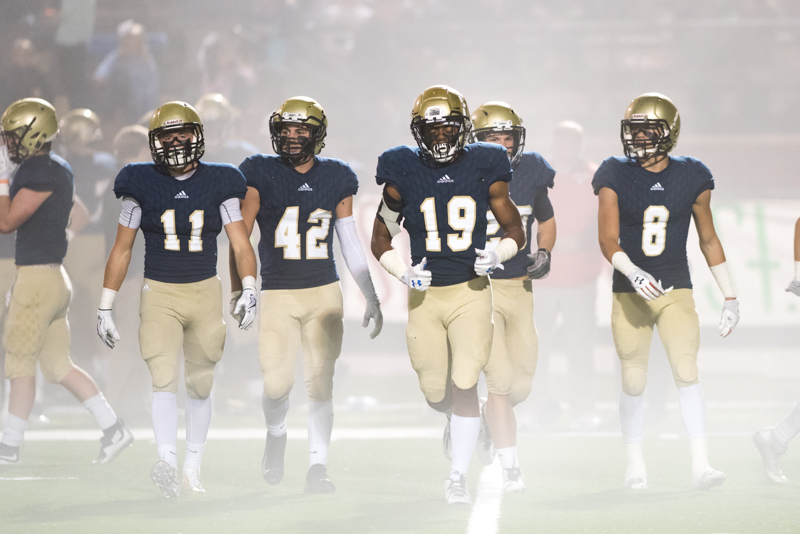 Briarwood has dreamed of this moment since last season ended. They were denied a spot in the state championship in 2016 after losing a heartbreaker to Wenonah in the semifinals.

But now in 2017, with that lone goal of redeeming last year’s gut-wrenching loss, the Lions find themselves in the title game with a chance to bring home the school’s first state championship since 2007.

That chance will come this Thursday night at 7 p.m. when the No. 1 Lions travel to Tuscaloosa to take on No. 7 St. Paul’s in Bryant-Denny Stadium.

Briarwood not only goes into the game with a chance at the state championship, but a chance at a perfect 15-0 record as well—something the Lions accomplished just once in school history back in 1998.

Their playoff run to this point has included a 62-0 win over Crossville, a 35-14 win over Lee-Huntsville, a 31-0 win over Etowah and an extremely thrilling 37-33 come-from-behind win over St. Clair County in the semifinals.

St. Paul’s also brings a strong resume to the table after compiling an overall record of 13-1 this season with that lone loss coming 27-20 to the Vigor Wolves on Oct. 20.

While they have been one of the more dominant teams this year, the Saints have played several close games, winning six games by 11 points or less, three games by three points or less and one game by just a point.

That one-point loss came in the semifinals of the playoffs, as like the Lions, St. Paul’s was pushed to the limit. In the end, the Saints prevented a 2-point conversion by Demopolis to hold on for a 20-19 win to advance to this point.

While both are coming off thrilling wins, or maybe better described as survival wins, Briarwood has only won two games by less than 11 points compared to the Saints’ six.

That being said, both are in familiar territory and won’t let the season up to this point determine the outcome on the field. Briarwood has won five state championships in school history and have been to two in the last 10 years.

Both of these teams bring in dominant defenses with Briarwood giving up 10.1 points per game on that side of the ball through 14 games, while St. Paul’s is giving up just 11.8.

Briarwood’s numbers got skewed in last week’s game thanks to allowing 33 points, but had been giving up just 8.4 points per game prior to that.

It’s a defenses that has two guys putting a ton of pressure in the backfield with Gabe Russell having 10.5 sacks on the season and Dalton Brooks having 6.5.

The Lions also have a combined eight interceptions between Carson Donnelly (3) and Cade Dickinson (5). It shows that passing on this Briarwood defense is difficult to do with the presence in the backfield and then even if there is time to throw, the secondary is ready and waiting.

It’s something that will be key as Briarwood squares off against a solid quarterback in Swift Lyle, who has thrown for 1,769 yards and 20 touchdowns on the season.

The Lions also have a strong quarterback in Michael Hiers, who had three touchdowns in the comeback effort against St. Clair County. Hiers has thrown for 2,659 yards and 20 touchdowns this season, which are crazy numbers.

What I think can be a big difference maker is Hiers. Unlike Briarwood, St. Paul’s isn’t as good up front on the defensive side or in the secondary. They have one player with three interceptions and two guys with a sack, Harris Sankey with a team-high five and Reginald Bracy with one.

While JR Tran-Reno has been a big bulk of the offense for the Lions this season, I expect him to make his biggest plays in the receiving game along with Carson Eddy as Hiers should have enough time to make plays in this game.

Defensively for Briarwood, it extends well beyond interceptions and pressure in the backfield as the Lions will not only be facing one of the best quarterbacks they have seen this year, but two running backs that have combined for more than 2,000 yards rushing.

Jordan Ingram is leading the pack with 1,087 yards and 11 touchdowns, while AJ Finley has added 976 yards and seven touchdowns. It’s a dynamic offense that Briarwood has yet to see this season.

That being said, I think Briarwood’s offense will be able to score points, so if the defense plays like it has all year up until that game with St. Clair County, and can give the offense some cushion, I see no reason they can’t win this game.

I still think the most adrenaline and excitement I have seen from Briarwood this season was before its matchup with Wenonah in the regular season. If the Lions come out and play with that level of intensity and execution, I see no reason they don’t win this game.

I have ridden the Briarwood train since the end of last season when I looked over the All-County nominations and saw what all they had coming back. From that moment on, I said the Lions would win a state championship this year. I can’t back off of that prediction now.