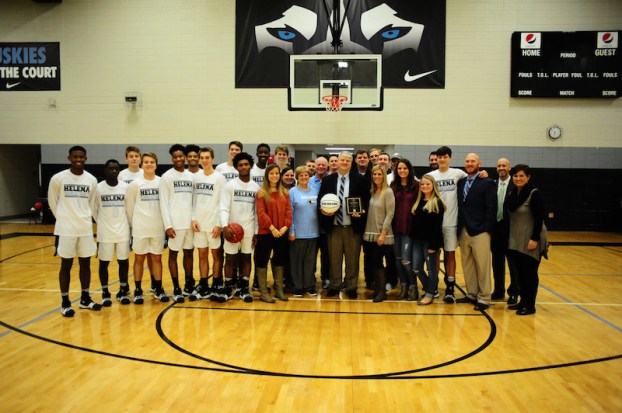 Helena High School head basketball coach Chris Laatsch was honored by administrators at HHS in a pregame ceremony for picking up his 350th career victory on Nov. 20. (Reporter Photo/Graham Brooks)

HELENA–The Helena High School boys basketball team had a different pregame routine the night of Nov. 30, to honor one of its own.

Helena varsity head basketball coach Chris Laatsch picked up his 350th career win while the Huskies were competing on the road in the Sneaky Pete’s Rebel Classic when Helena defeated Spain Park 68-41 on Nov. 20.

After the win, administrators at Helena High School wanted to honor Laatsch at the Huskies’ next home game for his hard work and dedication the last four seasons at HHS.

Helena High School Principal April Brand presented Laatsch with a commemorative plaque and basketball to honor the milestone, all the while keeping the pregame ceremony a surprise to Laatsch.

“I want to say thank you,” Brand said. “You’ve worked incredibly hard to establish our basketball program here and moved into an athletic director role and are so valuable not only to our school but this community. Congratulations, because you mean a lot to a lot of people.”

Surrounded by family and close friends, Laatsch was taken aback when he was greeted by several former players who spoke highly of his coaching and influence during their playing years at the ceremony.

“It was special, I had no idea they were doing that or had a plan to keep that a secret but it’s just special,” Laatsch said. “It’s just a reminder of all the great people that I’ve had the blessing to be a part of. I’ve been at three schools and have loved all of them and have loved the people that I’ve had the opportunity to coach. Helena is a special place and they’ve embraced me and my family and they’ve embraced what we’re trying to do. It makes it special to be able to have something like that here because Helena just feels like home.”

Helena is off to a great start in year four under the direction of Laatsch, as the Huskies have yet to drop a game so far this season.

By GRAHAM BROOKS / Staff Writer CALERA–On the same day Calera found out it would be moving up to the... read more