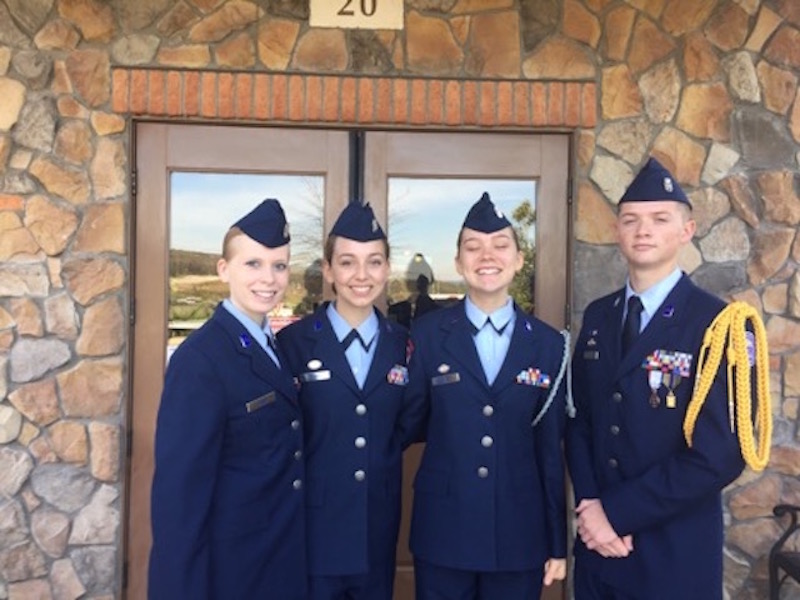 On Thursday, Nov. 9, the JROTC unit hosted the annual Veterans Day Ceremony at Thompson High School at 8:45 a.m. From practices to set-up to ironing the white tablecloth, JROTC cadets spent a great amount of time preparing for the ceremony.

Every year, students and administration are encouraged to invite veterans, family members and citizens in the community to come out and truly be touched by this experience. A lot of hard work by multiple groups is put forth to make this program more successful and enjoyable every year.

Introducing the ceremony, JROTC cadets marched in formation to their designated seats, signifying the respect and honor of wearing the military uniform. JROTC’s Color Guard once again presented the colors, followed by the National Anthem and the Pledge of Allegiance.

This year, over 60 veterans attended the ceremony. Additionally, the crowd cheered on Clarence South, a 96-year-old WWII veteran who was a ball-gunner for B-17s. In tradition, the Honor Guard solemnly and honorably performed the Prisoner of War/Missing in Action Remembrance Table. This table’s purpose is to serve as a form of closure to family members and friends of POWs and MIAs, but is more importantly meant to honor those members who were taken prisoner or who became missing in action.

Students, administration, contributors and guests expressed an exceptional amount of gratitude and appreciation toward the veterans throughout the ceremony.

Many cadets had the privilege of walking around and having short conversations with each veteran, listening to incredible stories. Each cadet was assigned to a certain time frame with a group; however, many cadets enjoyed the opportunity so much that they decided to stay a few hours longer, some even the entire day. The 33 cadets who raised a total of 89 hours were touched by this opportunity and are planning to reach out to even more restaurants next year.