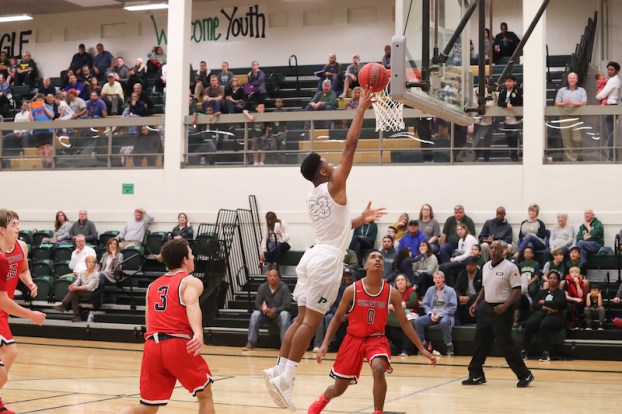 Pelham's Chris Brown lays the ball in during the win over Homewood. He had a season-high 29 points and 14 rebounds to lead the Panthers. (For the Reporter/Dawn Harrison)

PELHAM – Chris Brown had some big shoes to fill for the Pelham Panthers coming into the 2017-18 basketball season with the departure of Shelby County Player of the Year and current Alabama basketball player Alex Reese in the post.

While senior Justin Allison continues to be one of the best players in the state for Pelham, the Panthers needed that No. 2 guy to step up and fill Reese’s shoes if they wanted to make a second consecutive deep run in the playoffs.

Brown, a junior, has done just that so far this season, not just scoring, but on the glass as well posting several double-double performances. He has three double-doubles in a row, has scored 20-plus points three times this season, including a season-high of 29, has scored 19 twice and has a total of 140 points and 60-plus rebounds in his last seven games.

The latest amazement from the duo came on Tuesday, Dec. 5, against Homewood when Brown exploded for his season-high of 29 points, while also posting 14 rebounds. That, complimented by Allison’s 16 points, five rebounds, four assists and two steals, led Pelham to a 59-49 win over the Patriots.

While the offense performed well, the defense shined. Coming out of their last win over Spain Park, Floyd emphasized how pleased he was with the defensive effort and it’s something that continued into this game.

It led to just 19 combined points, seven in the first quarter, from Homewood.

“Another great defensive performance in the first half tonight,” Floyd said. “I’m really proud of the way we continued to defend.”

Pelham used that defensive momentum and turned it into points on the offensive end scoring 14 in the first quarter and 17 in the second quarter to take a 31-19 lead into the half.

Pelham had built up a decent lead and possibly wasn’t as strenuous on defense in the second half, which led to Will Simmons making six of his eight 3-pointers for Homewood in the half.

His strong play willed the Patriots back into the game, but never any closer than six points with 1:01 to play. Pelham went on to knock down four of its five free throws to ice the 59-49 win.

Behind Allison and Brown, Gipson had seven points as the highly energetic athlete had one of his better games of the season.

Simmons led Homewood with 21 points, all on 3-pointers.