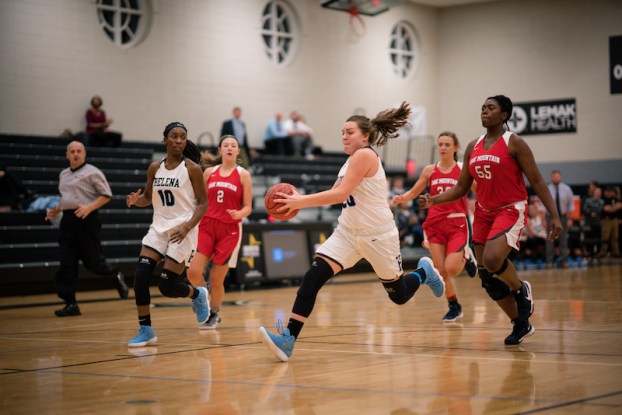 Oak Mountain used a strong fourth quarter to pick up a 57-45 win on the road against Helena on Dec. 6. (For the Reporter/Adam Lee)

HELENA–The Oak Mountain Eagles girls basketball team traveled to Helena on Tuesday, Dec. 6, and defeated the Huskies 57-45 behind the 21 points of Kennedy Smith and a strong fourth quarter.

Both teams shot the ball extremely well from behind the 3-point arch as the Eagles finished with nine made 3-pointers while the Huskies had eight.

Oak Mountain led 23-18 at half as both teams came out on fire in the third quarter.

The Huskies had no answer for Smith as she scored 12 of her 21 points in the third quarter. On the other side, Helena’s Jordan Jones and Brandis Lang both combined for 14 of the Huskies 19 third quarter points.

Both teams scored 19 points in the third quarter as Oak Mountain led 42-37 going to the final quarter.

The momentum of the game shifted in the final eight minutes as the Eagles raced out to a 10-0 run and never looked back.

Both Smith and Kalley Rory had six points in the fourth quarter and Abi Brown added a 3-pointer to seal the 57-45 win. Rory finished with 14 points.

Despite taking the loss, Helena head coach Alan Skinner is proud of his team’s fight and the direction they are headed as a team.

“It’s been a slow go so far which I knew that would happen but I feel like tonight we did a lot of things well that the scorebook isn’t going to reflect,” Skinner said. “I felt like our energy was up the entire game and the energy on our bench seemed great. It felt like we’re kind of starting to get some of that cohesion about us and we’re starting to figure each other out and what we do well.”

Jones was the leading scorer for Helena finishing with 13 points.

By GRAHAM BROOKS / Staff Writer HELENA–To say points were hard to come by in a contest between the Helena... read more