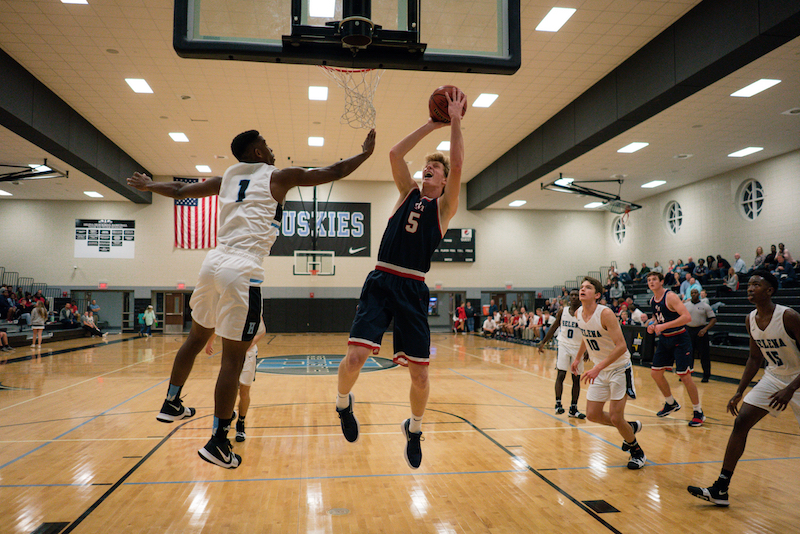 Helena improved to 9-0 on the season after grinding out a 23-17 victory over Oak Mountain on Tuesday, Dec. 5. (For the Reporter/Adam Lee)

HELENA–To say points were hard to come by in a contest between the Helena Huskies and Oak Mountain Eagles on Tuesday, Dec. 5 may be a bit of an understatement.

In a game where the two teams combined for just nine total points at halftime, Helena finally broke through in the third and fourth quarters using a 14-0 run to down the Eagles 23-17 to improve to 9-0 on the season.

Helena led 5-4 at halftime resembling a baseball-like score, but after some halftime adjustments, the Huskies took over the game in the third quarter.

Leading 7-6 early in the third quarter, Helena began pressing in the backcourt in an attempt to cause some Eagle turnovers and to speed up the game.

The strategy worked as Nate Andrews buried a 3-point basket in the corner off a missed Oak Mountain basket to extend the Huskies lead to 10-6.

Helena head coach Chris Laatsch said not being able to score in the first half hindered the Huskies ability to get in its press defense.

On the next possession, Helena blocked an Oak Mountain shot underneath the basket which resulted in Justin Stuckey draining a 3-pointer to make it 13-6 Helena.

Helena’s largest lead came at 19-6 after the 14-0 run with four minutes remaining in the game.

The Eagles scoring drought finally ended after a Drew Dunn made 3-pointer to cut Helena’s lead to 19-9. Dunn finished with nine points to lead all scorers.

With under four minutes to go in the game it was too little, too late for Oak Mountain as Helena sunk a few free throws and ran out the clock for the 6-point win.

Laatsch said over the course of the season his team will face several challenges and in order to be great, the Huskies will need to learn to win a variety of ways.

“To be a champion you’ve got to learn how to win a variety of ways in games that are of a variety of ways,” Laatsch said. “You have to be able to win and adjust to different styles and tonight we had an opportunity to really grind out a win.”