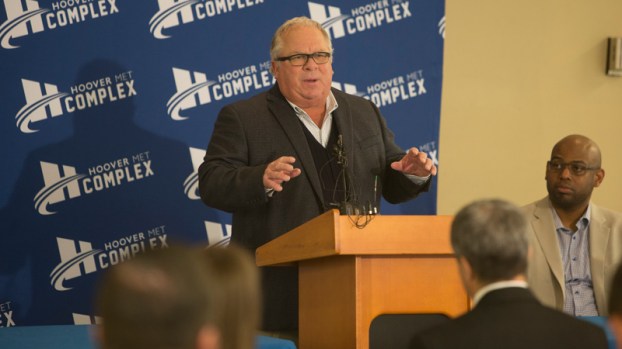 John Castleberry, East Coast Cross Checker and scout for the San Francisco Giants, speaks at an announcement that the East Coast Pro event is coming to the Hoover Metropolitan Complex. (CONTRIBUTED)

HOOVER – Beginning summer 2018, the Hoover Met Complex will be the site of a prospecting event for talented players to showcase their skills in front of Major League Baseball scouts.

On Aug. 1-4, the top 150 east coast high school baseball players selected by MLB scouts will have the opportunity to play in front of MLB scouts, coaches, agents, family and friends.

“East Coast Pro is very excited to bring our world class event to the Hoover Met Stadium and Hoover, Alabama. The decision to move our event to Hoover was a no-brainer after we saw the major league style facility,” said John Castleberry, East Coast Cross Checker and scout for the San Francisco Giants. “We are looking forward to having the top players from the eastern seaboard come to be evaluated and enjoy the Southern hospitality of Hoover this summer.

“For four days, this will be the Mecca of baseball, of amateur baseball.”

As a part of the selection process, the Arizona Diamondbacks, Milwaukee Brewers, Florida Marlins, Toronto Blue Jays, Boston Red Sox and Kansas City Royals will be the six sponsoring teams that will be selecting players from six different regions all who will attend the ECP in 2018.

“The East Coast Pro will provide the selected athletes with informative seminars for both parents and players regarding what a MLB career can offer,” said Monty Jones Jr., general manager for the Hoover Metropolitan Complex.

East Coast Pro’s objective is for MLB scouts to form six teams with the most talented high school underclassmen from their prospective regions on the East Coast.

The East Coast Pro event is unique in the fact that the event is run by, and the players selected by, professional baseball scouts in one venue. The basis of the event is to assemble these elite players on one field that presents a true professional environment.

“This is truly a great opportunity for both the players and the representatives of all 30 Major League Baseball teams to enjoy an event that brings together the most talented players east of the Mississippi River,” Hoover Mayor Frank Brocato said.

Annually, between 72 and 95 players from the event are selected in the upcoming year’s MLB Rule 4 Draft. Current MLB stars who are among the East Coast Pro alumni include Mike Trout, Josh Donaldson and Madison Bumgarner.

“You’ll see a lot of these guys on TV,” Castleberry said.

Mikey White, a Spain Park High School graduate who participated in the East Coast Pro and is now part of the Oakland Athletics organization, was on hand for the announcement.

Proceeds from the event are placed in a fund to aid MLB scouts, both active and retired, in need of financial assistance due to unfortunate circumstances. The organization also assists with donations to seven scouting associations on the East Coast.

“This agreement with East Coast Pro is a three-year deal and we are proud to have brought this event to Hoover,” Hoover City Council President Gene Smith said. “This opportunity is going to be one of the largest steps we’ve taken with the [Hoover Met Complex] since construction began.”