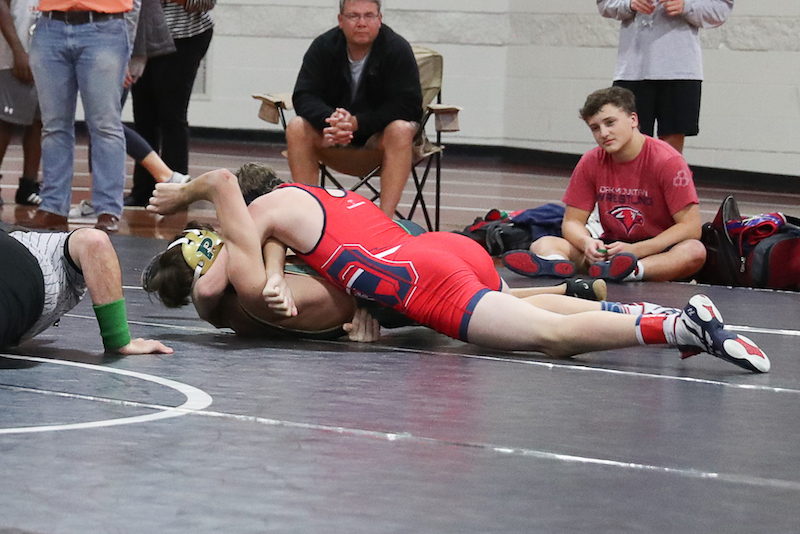 Oak Mountain got a huge win over back-to-back state champion Vestavia on Tuesday, Dec. 5. (For the Reporter/Dawn Harrison)

Oak Mountain and Vestavia have become two of the more powerful wrestling programs in the state that seem to be in the running for a state championship every season.

All time, Vestavia has 13 state championships in wrestling and has won back-to-back championships the past two years showing their dominance in the sport and the task at hand for the Eagles on Tuesday, Dec. 5, when the two teams squared off in a regular season match.

Thanks to seven pins from Oak Mountain, however, the Eagles were able to come out on top 49-26 in rather dominating fashion to give the team confidence moving forward this season.

It all started in the 106-pound weight class as Oak Mountain’s Patrick Neal and Vestavia’s Chrisopher Hayes squared off in one of the more thrilling events of the evening.

In the end, Neal picked up a 12-5 decision to put three points on the board for the Eagles.

Ryan Sumerlin ended up answering for the rebels with a major decision in the 113-pound division to give Vestavia four points.

In the next five weight classes, however, the Eagles were able to string together five consecutive pins behind Cole Thomas, Sullivan Tipton, Jace Sproull, Brett Cruce and Carlos Harris.

Those five pins gave Oak Mountain a combined 30 points on the board, which put Vestavia in a deep hole to have to climb out of.

While the Rebels were able to pick up three pins the rest of the way from Bowman Hill, Bryce Littleton and Cody Hooper for 18 points, they were unable to overcome the deficit and ended the night with just 26 points.

The Eagles got two more pins from Jordan Davis and Andrew Lee in the 220- and 285-pound weight classes, respectively. Barrett Blakely also got a major decision for Oak Mountain in the 170-pound classification over Peter Dazzio to create the total of 49 points.