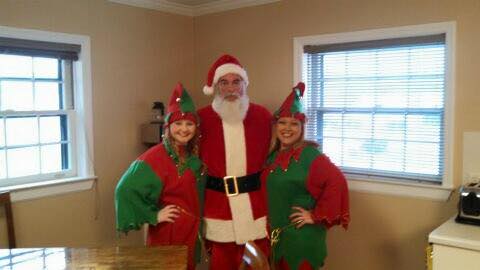 The Pelham Fire Department will escort Santa Claus through the city on Dec. 24. (Contributed)

PELHAM – Santa Claus will take a much-needed break from the North Pole to visit the children of Pelham on Christmas Eve, Dec. 24.

Residents will have several opportunities to see Santa Claus on Christmas Eve as he makes his way through the city atop Pelham fire engines. Members of the Pelham Fire Department will accompany Santa.

It’s a Pelham tradition that dates back nearly 30 years, according to Pelham Fire Department officials. However, over the past few years the city and Santa have transitioned to a new way of touring the city.

Fire engines used to escort Santa down nearly every street in the city, but given the city’s growth, that method is no longer feasible.

There are now signs, deemed Santa Stops, located throughout the city that signify where fire engines will be on Christmas Eve. With this method, fire engines have time to stop so that Santa can mingle with children before moving on to the next Santa Stop.

After Santa has visited a Santa Stop, the sign will be removed to let residents know that he has already been to that particular stop. Residents could then catch him at another stop.

For the complete list of Santa Stops, go to Pelhamalabama.gov/CivicAlerts.aspx?AID=171.

PELHAM – The Pelham Public Library recently announced a handful of events for adults that will kick off at the... read more