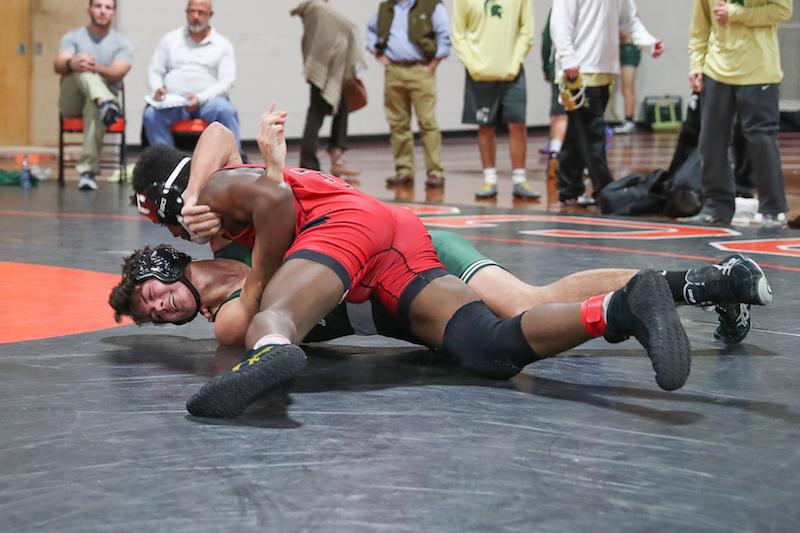 Thompson picked up a sweep at the Oxford tri-match on Tuesday, Dec. 5 by taking down Oxford and Bremen (GA). (For the Reporter/Dawn Harrison)

OXFORD – The Thompson Warriors’ wrestling team traveled to Oxford on Tuesday, Dec. 5, to take part in a tri-match with Oxford High School and Bremen High School from Georgia.

Back in usual form, the Warriors swept the match with a dominating performance by taking down Bremen 46-30 and Oxford 42-27.

The first match with Bremen came down to decisions after each team was able to pick up five pins apiece in the match. The difference maker was the Thompson wrestlers doing enough to win four decisions to Bremen’s zero.

Technically, the two teams tied in pins with five, but the forfeit for Bremen in the 106-pound weight class gave Dylan Lesueur six extra points. For Thompson, which were key.

After that, the Warriors got four consecutive pins in the next four weight classes. As leaders of the team, James Latona, Sam Latona, Chandler Akins and Gabe Hixenbaugh all picked up a pin to pace Thompson.

The only other pin for the Warriors came from Alex Ward in the 182-pound weight division. Thompson got decisions from Nathan Roberts and Michael Jackson and a major decision from Jackson Araneta to seal the win.

That domination didn’t change in the second match of the night with Oxford as the Yellow Jackets needed 14 escapes and got just four takedowns.

Thompson ended the match with daunting number of 24 takedowns and needed to use just five escapes in the match.

Lesueur picked up six more points in the match, but instead of a forfeit he was able to pick up a pin over Kaleb Shelton instead.

Hixenbaugh picked up a win on a technical fall in the 132-pound division, which gave Thompson five points instead of four or three like a decision would have.

The Warriors did get decisions from Judah Campbell (120) and Roberts (138) to sew up the 42-27 win and complete the sweep in the event.