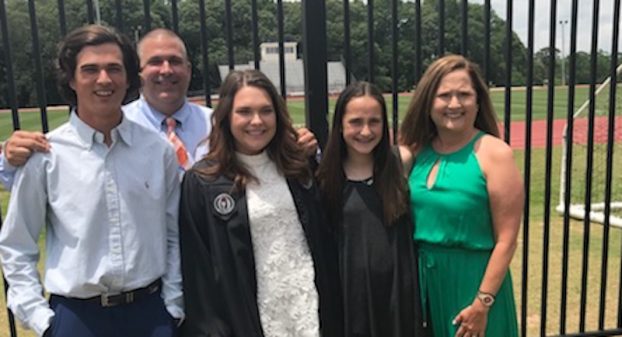 The community has rallied around Kristi Ingram, far right, and her family while she battled breast cancer. Kristi died on Nov. 24. (File)

CHELSEA – From Friday, Nov. 24 through Tuesday, Nov. 28, the city of Chelsea flew its flag at half-staff in remembrance of a Chelsea local who had a lasting impact on the community.

Kristi Ingram, who was an active volunteer, church member and the wife of Chelsea city council member David Ingram, died on Nov. 24. David said she lived selflessly while fighting breast cancer for many years.

“I think that people saw a person who was always willing to give to the community and always had a smile everywhere she went,” David said.

David said he and Kristi originally started dating after being introduced by a mutual friend in 1998. They were later married on Sept. 4, 1999, and celebrated their 18th anniversary shortly before she passed on.

“Kristi was from Auburn and I was from Alabama, and we had both moved back to Birmingham,” David said. “At the time, I had a daughter. Sara was just 4 years old.”

David said he was surprised by how quickly Kristi bonded with Sara after they first met.

“A lot of women just out of college wouldn’t be very interested in a guy with a child,” David said. “She was interested in getting to know Sara. One of our first dates was taking Sara to the Birmingham Zoo.”

Throughout her life in Chelsea, David said Kristi had a fondness for children: “For hers and everyone else’s as well.”

“She worked at Mother’s Day Out at Liberty Baptist Church for years. We kept a preschool class every Sunday for three or four years, ” David said. “She was always here in the neighborhood if anyone needed a babysitter.”

Kristi was originally diagnosed with breast cancer in the spring of 2010, and went into remission shortly after taking several preventative measures.

“There were a few suspicious things and some mammograms. Her doctor wanted her to get things checked out. It tended to be a type that would have spread from one side to the other,” David said. “She was always willing to do anything to live. She had a double mastectomy and four to six rounds of chemo. From there, things went back to normal.”

Unfortunately, the cancer came back in the spring of 2014, and Kristi began using hormone treatments until late 2016.

Until the summer of 2017, David said the family was not outspoken about Kristi’s cancer, not wanting to alarm anyone.

“We didn’t keep it a secret. There were people who knew, but we were trying to keep this from affecting our kids. We were trying to stay positive that the treatment would work,” David said. “When we got to the point where she couldn’t do certain things, that’s when we knew that we needed help and prayers as well.”

While battling her cancer, David said Kristi continued to volunteer with local sports teams and children at church and in their neighborhood.

“She felt fine, but the scans showed otherwise,” David said. “That may have been due to her outlook. We learned through the year that she had a higher tolerance for pain and sickness than the average person.”

After the news broke, David said the community rallied around the family in support. Local youth and school sports teams held several “pink out” games in her honor and raised funds for breast cancer research.

“She was extremely humbled by all of this. At times, she almost didn’t feel worthy of all the support she was receiving, but it really helped us with what we were going through,” David said. “It’s been unbelievable. You can’t imagine going through something like this alone. People would always text Kristi and ask what she needed. All she would ask for was prayers. That got her by for months, knowing that people were here for her and praying.”

Chelsea Mayor Tony Picklesimer expressed his sadness at Kristi Ingram’s passing, and said many people in the city will miss her magnetic personality.

“Kristi was the kind of person that drew everyone to her. She always had a pleasant foot forward, even when she didn’t feel good,” Picklesimer said. “She gave of our volunteering, especially at our sports events. She’s one of those people that a lot of people considered their best friend. She will be greatly missed.”

Since Kristi’s passing, David said the he and their three children, Sara, Dawson and Kinlee, have been healing in their own ways. He said Kristi’s mother Nanci White, was essential to helping the entire family make it through a tough time.

He said he could not be more thankful for the overwhelming support they have received from the community.

“It’s too hard to thank every single person, but we appreciate everything that everyone in the community and beyond has done for us and is continuing to do,” David said.

David said he knows Kristi’s life will leave a lasting impression on the Chelsea community and hopes the way she lived will help others tackle challenges in their own lives.