Helena, Vincent both No. 1 in latest rankings 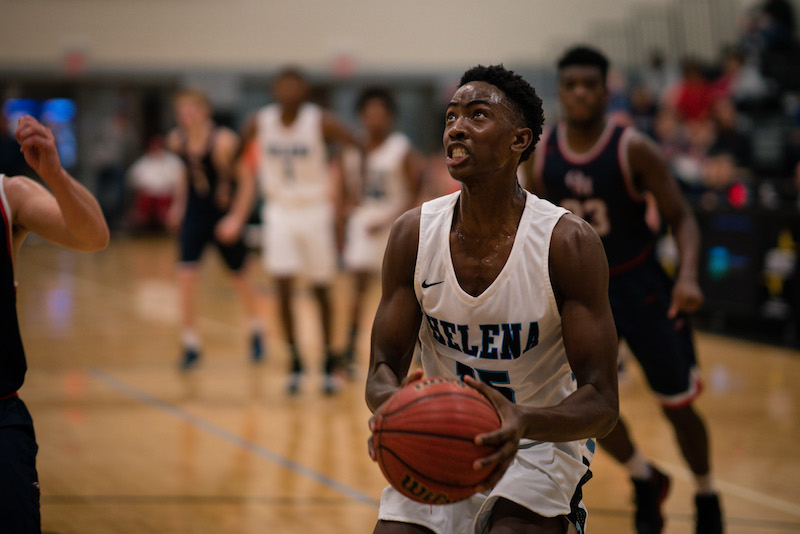 Helena is off to a 9-0 start to the 2017 basketball season and with six of those nine wins coming against 7A opponents, they have earned the No. 1 ranking in Class 6A. (For the Reporter/Adam Lee)

As successful as the 2016-17 basketball season was in Shelby County with seven teams being ranked at one time, there was never a week where the county had two No. 1 teams in the standings.

It’s taken just two polls into the 2017-18 season for two teams to break that drought as the Helena Huskies and Vincent Yellow Jackets were at the top of the pecking order in their respective classification.

As the only undefeated team in the county and one of two in Class 6A top 10, Helena has earned its spot atop the standings in the classification.

Sitting at 9-0 on the season with six of their nine wins coming over 7A opponents, the Huskies are one of the hottest teams in the state right now and have plenty of people talking.

With senior leaders like Dionte Tolbert and Justin Stuckey, as well as at least seven other players that can score and log big minutes on a nightly basis, this team will be a tough out moving forward.

Just behind them in second in the 6A standings is the team that knocked them out early in the playoffs last year, Paul Bryant (5-2).

Vincent has gotten off to an equally good start in the 2A classification and has earned the nod for No. 1 there as well.

The Yellow Jackets, who grabbed the No. 1 ranking in the first week of the polls release, won three consecutive games to maintain that spot as they currently sit at 7-1 (1-0) on the season.

The schedule will get much tougher for the Yellow Jackets moving forward, but if they continue getting contributions from several players like they have been, then they’ll be just fine and maintain their ranking.

Chelsea, Oak Mountain and Pelham all came up just short of a spot in their respective top 10 as each holds an overall record of 5-3 through eight games.

Chelsea and Pelham have each gone 2-0 since the last standings were released with big wins and should jump into the top 10 with one more strong week of play.

The Hornets have picked up wins over Clay-Chalkville 51-38 and Tuscaloosa County 56-44; while the Panthers have beaten Homewood 59-49 and Spain Park 66-55.

Oak Mountain has gone the opposite way over the last week. After winning five straight games, the Eagles ran into 6A No. 1 Helena and Hewitt-Trussville, who is 6-1 on the season.

They lost both of those games in tight contests and are still a legitimate threat moving forward.

Briarwood (4-2) also fell out of the top 10 to a nominated position after a tough loss to now No. 5 Pleasant Grove who is 6-0 on the season.

The Lions are still playing without senior leaders Michael Hiers and Carson Donnelly, both of who are on the football team vying for a state championship.

Briarwood was able to pick up a big 66-55 win over Pell City during the last week to go 1-1 as they continue to show how deep they will be when the football players come back.