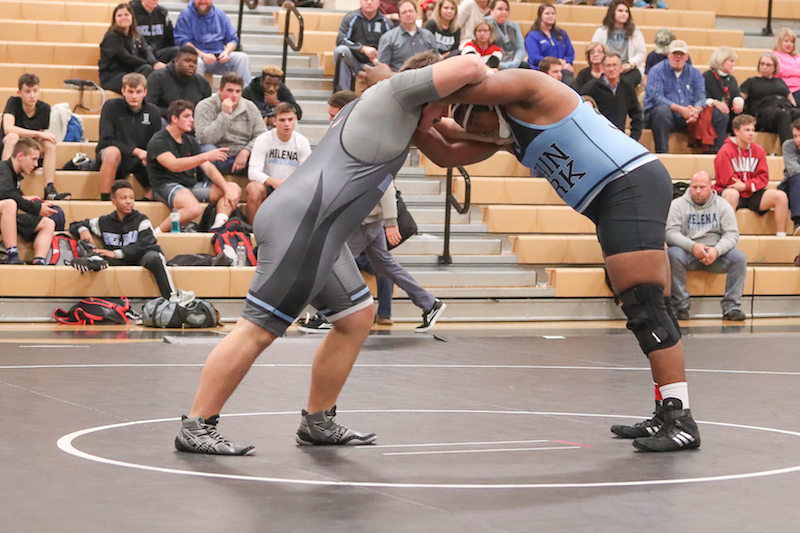 Spain Park's Cameron Young and Helena's Roland Mines wrestle in what was the match-deciding event on Wednesday, Dec. 6. (For the Reporter/Dawn Harrison)

HELENA – With Spain Park leading by three points over Helena, Cameron Young of the Jags and Roland Mines of the Huskies went into their 285-pound bout with each other on Wednesday, Dec. 6, looking to lead their respective wrestling team to victory.

A pin or a decision win would have won the match for Helena, but the same was true for the Jags. Had the Huskies been able to pull off the tie with a three-point decision, the tiebreaker would have gone back to the first event of the night, which Helena was able to win.

Instead, the Jaguars were able to come out on top as Young picked up a 5-3 decision in the deciding matchup to grab a 42-36 win over the Huskies. It was about as thrilling of a regular season wrestling match as you could ask for with it going all the way down to a decision in the final weight class.

Both teams laid it all on the line and it led to five pins apiece from each side. While both teams also picked up six points apiece from one forfeit on each side, the difference was the total of decisions as Spain Park picked up two key decisions to Helena’s zero, including the match-winning decision in the final fight of the night.

Will Miller (106) and Blake Breckenridge (120) were able to start things off with pins in two of the first three weight classes. Helena’s Michael Moran also got six points in the 113-pound classification thanks to a Spain Park forfeit.

The Jaguars answered with wins in the next four weight classes. Emmanuel Thuo put up the first six points thanks to a Helena forfeit. That was followed by a decision win for Caelan March in the 132-pound division for three points.

Each team swapped pins over the next few matches with Chris Miller picking one up for Helena, then Jacob Sharpe answering with one for Spain Park.

The Huskies followed that up with pins in the 182- and 195-pound weight division from Nathan Dunaway and Tucker Knight to pull ahead 36-33 heading into the final two matches.

Spain Park’s Andrew Moses picked up a huge pin in the 220-pound weight class to push the Jags right back in front by three points, a lead they were able to hang onto thanks to Young’s decision win.

All around, it was an exciting night for both teams as they look to continue successful 2017-18 seasons.