Seeing recent PHS graduate Courtney Cole and other alumni at Pelham’s Tree Lighting afforded me the chance to see Pelham Civic Complex’s recent renovations through fresh eyes. Greeting Cole, I asked what she thought of the improvements. 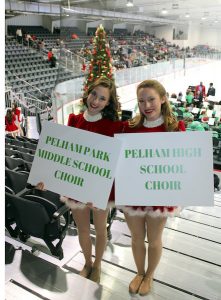 “The new seating is amazing! I’ve brought my friends from UAB to discover how wonderfully Pelham starts Christmas,” Cole said, explaining her entourage before venturing off to explore.

Although last year’s tree lighting was more of a Christmas Open House due to construction, Pelham’s citizens were excited to have the ice back. Many Pelham student groups were in attendance this year as always.

In my classroom that day, I overheard one student say that he was attending the tree lighting.

“Are you performing with choir or band?” one classmate asked.

“Just going with my family,” he said. “Attending the tree lighting is our family tradition.”

At school, discussion of Pelham’s Tree Lighting had led into our Advanced Placement English Language argumentation lesson. Most students were unfamiliar with the events of 2011 when this tree lighting venue was in danger of being converted into a fire museum. Considering the online petition that skating parents wrote to save the main arena, we dissected the thesis of this argument. Citing the evidence or reasons left by those who signed, we noted the classification of their arguments. The call to action asking the mayor and city council members to save the ice was powerful—and effective.

At Pelham’s Tree Lighting taking photos of PHS students, the importance of the first amendment right to free speech and argumentation to communities was clear.

Because concerned citizens were brave enough to shine a light in 2011, Pelham remains united in tradition.