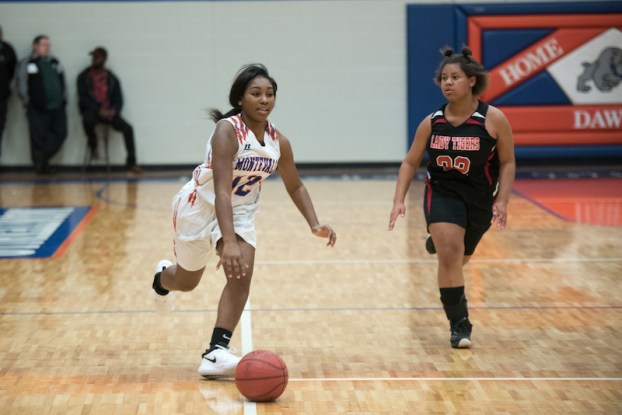 Montevallo remained ranked at No. 9 in the 3A standings after going 1-1 during the week of play before the rankings were released. (Reporter photo/Keith McCoy)

We are now five weeks into the 2017-18 basketball season whether you believe that or not and it has not been a disappointing five weeks in the girls ranks.

On Wednesday, Dec. 6, the second ASWA girls basketball poll was released ranking the top 10 teams from Class 7A down to Class 1A, including nominated teams that didn’t quite make their respective top 10.

With those in the others nominated category, Shelby County had a total of six teams found somewhere in this week’s standing, but just two of those six were inside the top 10.

Starting in the 7A classification, the Spain Park Jaguars found themselves at No. 3 for the second week in a row.

After winning six consecutive games to get to 6-1 on the season, the Jags finally stumbled in their last outing against Ramsay falling 63-53 in overtime.

It marked the second time this season the Rams have topped SPHS, doing so in the Jaguars’ opening game of the season on Nov. 13, by a final score of 56-44.

Ramsay, who sits at 6-3 on the season, is considered the No. 3 team in the 6A classification, which makes both of those losses look as good as possible.

The Jags are possibly the most stacked team from top to bottom in the county along with Westminster at Oak Mountain due to the number of returning players from last year’s team that competed in the state championship game.

Oak Mountain, who is off to a strong 7-3 start, was narrowly on the outside looking in as a nominated team. The Eagles beat Helena 57-45 and lost to No. 4 Hewitt-Trussville (9-1) since the last rankings were released.

If they can find some offensive prowess, then the Eagles will become a very difficult team to take down come area play.

Two teams found themselves nominated in the 5A classification as Calera (5-2) and Shelby County (5-0) were just outside of the top 10.

Calera has had a strong start to the season and has gone 2-2 since the last standings were released. They beat Childersburg 37-34 and Jemison 52-6, while losing to Helena 48-47 and Montevallo 56-47.

Shelby County has also gotten off to a strong start and is coming off a big win over Montevallo, the No. 9 team in Class 3A, where the Wildcats beat the Bulldogs 61-51 behind a dominant night on the court. They also have wins over Leeds, Chilton County and Pell City this season.

Montevallo’s loss hurt them slightly in the 3A rankings as the Bulldogs would have most likely moved up with a win in that one, but instead they remained No. 9 in the latest standings.

The Bulldogs beat Montevallo and Bibb County before falling to Shelby County to prevent a 7-0 start to the season.

The last of the teams mentioned in the standings was Westminster at Oak Mountain, who was nominated in the 1A classification with a 3-2 overall record. The Knights have only played one game since the last rankings and picked up an easy 56-20 win over Vincent.

As a Final Four team last year with everybody back, this team will jump back into the standings soon with several wins in a row.

By ALEC ETHEREDGE | Sports Editor AUBURN – Several of the county’s and state’s best swimmers met in Auburn on... read more