Students read about Vietnam, hear from someone who lived it 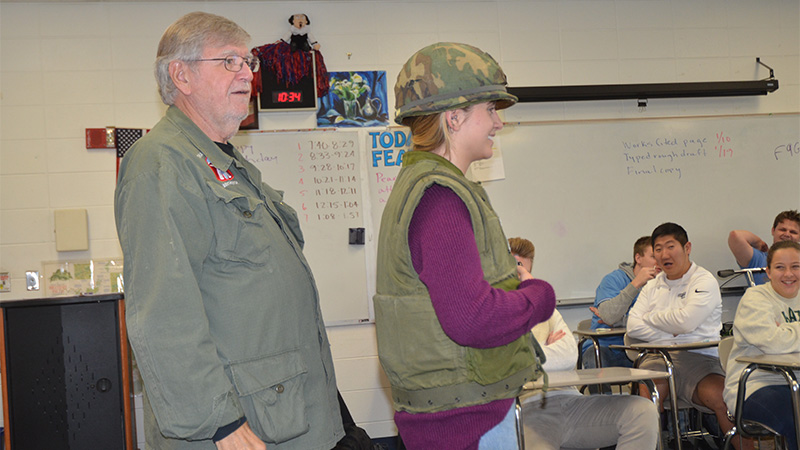 Vietnam veteran Ron Becker allowed Oak Mountain High School students to try on equipment soldiers would have worn during the war during a presentation on Thursday, Dec. 7. (REPORTER PHOTO/STEPHEN DAWKINS)

NORTH SHELBY – Oak Mountain High School senior Logan McNaughton plans to serve in the United States armed forces after graduation, and a special guest to his AP literature class on Thursday, Dec. 7, made McNaughton’s decision feel all the more real.

Ron Becker, vice president of the Birmingham chapter of Alabama Vietnam Veterans of America, spoke to Melissa Dixon’s class about his experience in the war after the students read the novel The Things They Carried by Tim O’Brien.

“It was eye-opening,” McNaughton said about Becker’s presentation. “It made me realize what I’m going into. It makes it seem a lot more real.”

Dixon said the novel delves into what soldiers carried mentally, physically, emotionally and spiritually. Becker read the book and then compared it to his own experience during five class periods.

“I relate to a lot of the stories,” Becker said. “A lot of his stories take me back to Vietnam. A lot of the characters…I may have served with them.”

Becker brought a flak vest, helmet and boots that a solider would have worn in the field and allowed the students to try them on.

Becker said he served for one year in Thailand then one year in Vietnam, building roads and clearing brush—and the occasional village if it was believed to contain enemy fighters.

“Sometimes it didn’t do any good to level the village because they lived in spider holes underneath,” Becker said.

The guest speaker discussed how his senses became heightened during the war, and the state of constant alert has stayed with him.

“The senses pick up, and the senses never go away,” Becker said about sometimes having difficulty in large crowds or noisy situations.

At the end of Becker’s presentation, students were given the opportunity to ask questions, including how he was able to detach himself from a traumatic situation in order to function effectively.’

Becker said he thinks everyone handled the situation differently based on their values and experiences, but he said that it was challenging for all the soldiers and admitted that they sometimes behaved in ways that would not have under less stress.

“I didn’t think I’d leave Vietnam alive, and I lived that way,” he said.

Becker talked about the importance of organizations such as Vietnam Veterans of America because they allow veterans the chance to spend time with others like themselves.

“There are a lot of guys out there who won’t talk about Vietnam, and that’s the most important thing you can do is talk,” he said.

Becker said he thinks the United States could do more to help soldiers returning home from action through de-briefing sessions, and he said that public support of veterans also helps.

Students said they were grateful to hear Becker’s first-hand account to supplement their studies.

“I just loved the stories,” student John Mark Price said. “You could tell he was really passionate about it.”

Dixon said having a speaker is an effective way to reinforce the material.

“Anytime you can bring history into the classroom, it really provides an unforgettable experience,” Dixon said.