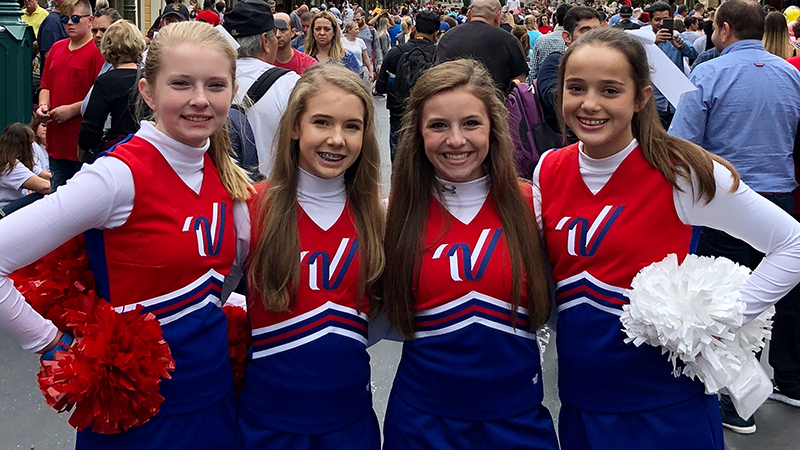 Four Thompson Middle School cheerleaders were selected to perform alongside 500 cheerleaders from across the country at Disney’s Magic Kingdom on Thanksgiving Day.

“I think the best part about the trip was getting to be with so many people that love exactly what you love to do,” said TMS student Lauren Gregory. “It was great having a sense of community, and making so many friendships with people that we wouldn’t have had a chance to meet otherwise.”

The girls performed with cheerleaders and dancers ranging in age from elementary, junior high and high school.

The individuals invited to perform in the parade were part of a select group of cheerleaders and dancers chosen as All-Americans during Varsity Spirit Summer camps across the country, according to a press release from Varsity Spirit.

“All Americans are selected via tryout based on either superior cheerleading or dance skills at camps operated by Universal Cheerleaders Association (UCA) and Universal Dance Association (UDA),” according to the release. “Only the top 10 percent of the cheerleaders and dancers from UCA and UDA camps earn the chance to march in a holiday parade of this caliber. This is the first year that Thompson Middle School had cheerleaders chosen to perform.”

TMS student Anna Cate Tanner described the experience as “really cool” and said she loved being able to march down Main Street at Disney and getting to ride many of the rides.

“All of the holiday decorations were up so it was nice to see everything decorated,” Tanner said.

While this was not Tanner’s first time to Disney World, it was her first time performing.

“I really enjoyed it,” Tanner said. “Learning all of the things we had to learn and having the opportunity to perform in front of everyone was just a lot of fun. It was also great meeting so many people.”

Gregory said all of the girls marched together to one routine, after they had previously been sent a video to learn some of the steps beforehand.

“We had been practicing prior to the trip, but we also had opportunities to all practice together,” Gregory said.

According to the press release, being chosen as an All-American is one of the highest honors a cheerleader can receive.

The Varsity All-American program is celebrating over 30 years of choosing camp standouts. For more information, visit www.varsity.com or www.varsitybrands.com.