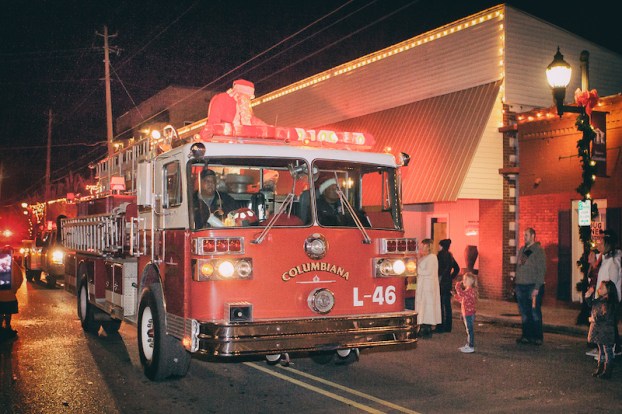 COLUMBIANA – Columbiana residents and visitors lined the streets in celebration of the city’s 15th annual Christmas Parade and Tree Lighting ceremony, which was held on the evening of Thursday, Dec. 7. The parade included floats by students from local schools, church members and civic organizations.

Mayor Stancil Handley said it warmed his heart to see so many people socializing and celebrating the birth of Jesus Christ.

“It’s another occasion where Columbiana citizens can get together, socialize and enjoy the holiday season,” Handley said.

Before the parade started, spectators gathered on Main Street to enjoy live entertainment provided by Mike Mason, the cast of the Shelby County High School production of “Elf the Musical” and the Dream Makers Dance Team.

At 7 p.m. the parade began rolling through the city from Elvin Hill Elementary school. While floats were not allowed to throw candy, Columbiana Middle School students walked alongside the parade to pass it out to children.

The parade concluded with the city’s annual Tree Lighting ceremony at the intersection of Main Street and College Street, which was referred to by Handley as “the climax of the event.” The tree was lit by the parade’s grand marshal, Bonnie Atchison.

Handley said Atchison was selected s this year’s grand marshal because of all the good work she has done for the city over the years.

“I refer to Atchison as Columbiana’s fairy godmother,” Handley said. “She has always fluttered about here and yon helping others.”

Columbiana business owners Tim and Martha Wilson said they have been coming to see the Columbiana Christmas Parades since they first started and noticed they attract visitors from all over Shelby County.

“It makes the town special. Look around, everyone’s hear,” Tim Wilson said. “They’ve basically shut the town down for it. It’s all about people coming out here and enjoying each other.”

Many spectators said one of their favorite things about the parade was seeing their loved ones involved.

“My husband works for Southeast Shelby Rescue, so we came to watch him along with this awesome parade,” Montevallo resident Sheena Wolfe said.

“The high school is having a drama and my son is in it. He plays Santa,” Wilsonville resident Kim White said. “I have another son in the band. He plays the saxophone.”

Wolfe said the parade made her feel nostalgic and served as a fun occasion for her three kids.

“They like it a lot. There are a lot of lights and a lot of things going on,” Wolfe said. “The parade hypes everything up. Columbiana has a nice, old style, and it brings back a lot of what Christmas should be about.”

For her family, White said the parade has become a family tradition.

“My family goes back six generations, so we have been here for every Christmas parade. We look forward to it,” White said. “The Columbiana Christmas Parade isn’t too big or too small. It’s just right.”

Handley said he considers the 2017 Columbiana Christmas Parade and hopes that people went home feeling festive and proud to be from the city.

“My hope would be that everyone takes away the spirit of Christmas and good feelings about Columbiana,” Handley said.

By Emily Reed / Special to the Reporter Four Thompson Middle School cheerleaders were selected to perform alongside 500 cheerleaders from... read more