Birmingham Bulls have won 2 of last 3 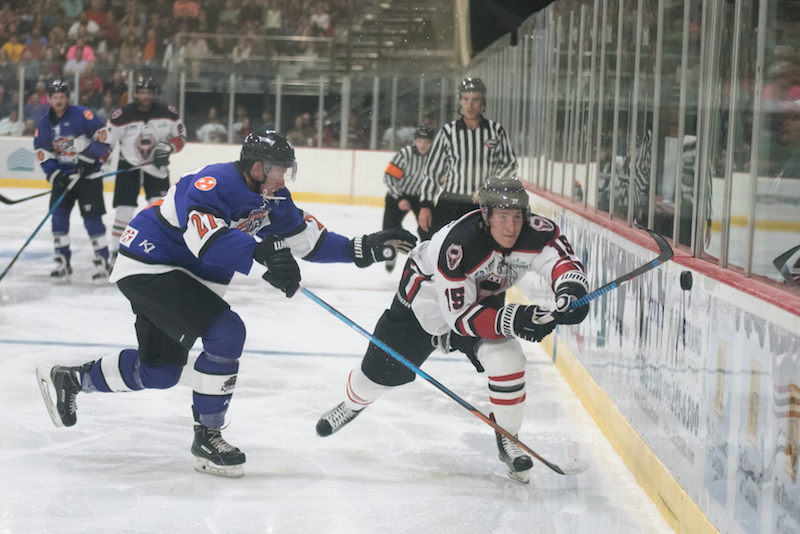 Birmingham has now won three of its last six games and two of its last three as the team seems to have hit a groove in recent weeks. (Reporter photo/Keith McCoy)

A tough three-game road trip for the Birmingham Bulls came to an end with history when the new franchise was not only able to pick up its first road win of the 2017-18 season, but string together back-to-back wins for the first time in SPHL franchise history.

After dropping their first seven contests of the season, the Bulls made history with their first win on Nov. 18 when they took down Peoria 4-3.

Birmingham went on to lose its next two games against Evansville 3-1 in regulation and Huntsville 2-1 in overtime.

Nonetheless, the Bulls seemed to have found their groove and it paid off come the weekend of Dec. 8 where they were scheduled to play three games in consecutive days.

The first of those three games came against the Mississippi RiverKings on the road.

Mississippi drew first blood with a bullet off the stick of Shane Bennet, who beat Bulls’ goalie Maveric Parks to give the RiverKings their only lead of the night at 1-0.

The goal came 4:35 into the opening period, but was answered just 2:09 later by Birmingham’s Josh Harris on the power play.

The Bulls got the opportunity thanks to a Matt Harrington tripping penalty, which led to the RiverKings being forced to play down a man and eventually ending in a 1-1 tie.

While each started fast and furious in the first period, the scoring slowed down for the remainder of the first.

The next bit of action came when Keegan Bruce was able to pick up a goal very quickly off the face off that got just passed Mississippi goalie Jared Rutledge.

Birmingham didn’t look back the remainder of the game as the Bulls went on to play spectacular defense. It also helped that Parks was able to stop 45 of the 46 shots he faced in the game.

Alexander Taulien went on to add an insurance goal with just more than six minutes left in the contest to give the Bulls the 3-1 win, and their second win of the season.

Birmingham followed that win up by traveling to Macon, Georgia and the Macon Centreplex to take on the Macon Mayhem for their second road contest in 24 hours.

Each team traded goals in the first and second period as Bruce and Nate Mitton scored for the Bulls, while Jake Trask and Dennis Sicard scored for the Mayhem.

Both of the first period goals were scored on power play opportunities.

While the first two periods were packed with action and led to a 2-2 tie heading to the final period of play, all of the excitement came in the third period.

It took just 19 seconds for the Bulls to break the 2-2 tie when Shane Topf scored thanks to a strong top-shelf shot that edged its way by Macon goaltender Troy Passingham.

The goal, which was assisted by Graham Yeo and Mitton, led to the 3-2 win for Birmingham as Charlie Millen handled 38 of the 40 shots thrown at him in goal.

With the win, Birmingham put together its first multiple game winning streak of the 2017-18 season.

The Bulls were finally able to take to their home ice on Sunday, Dec. 9, for their first home game in more than two weeks as they looked to grasp their third win in a row.

Playing host to the Pensacola Ice Flyers, Birmingham, as it had done several times this season, took an early 1-0 lead when Darius Cole fired the puck into the net off assists from Evan Schultz and Bruce.

Grabbing that early 1-0 lead and holding onto it for the entire game has proven to be a tall task for the Bulls and that was the case again in this one.

Pensacola got two unanswered goals from Anthony Calabrese and Charlie Adams (first of season) in the second and third period, respectively, to halt the Bulls’ winning streak at two games.

Parks, who has been hot in goal lately, stopped 50 of 52 shots in the loss. He faced almost double the shots that Ice Flyers’ goalie Gordon Defiel as Pensacola outshot Birmingham 52-28.

The Bulls are now 3-3 over their last six games after starting the season 0-7. They have also won two of their last three games and sit at 3-9 on the season with one overtime loss as well.