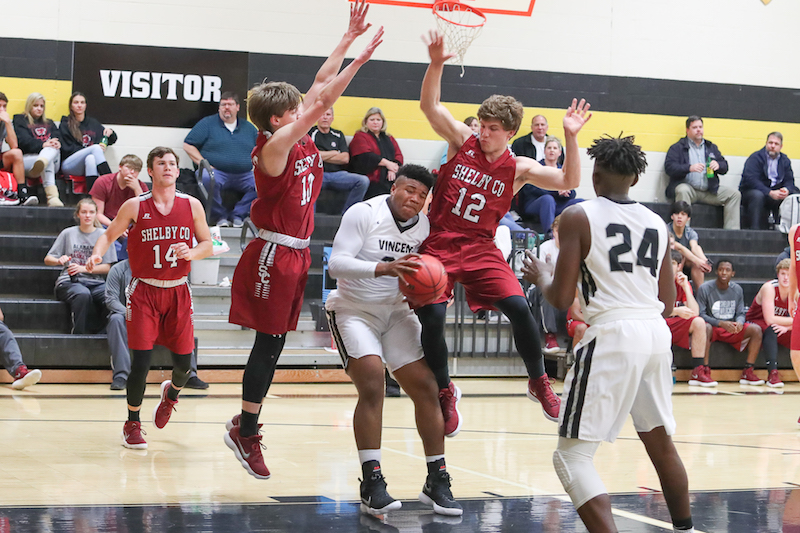 Vincent’s Chris Hardie powers through a double team by Shelby County. He led the Yellow Jackets by shooting 7-7 from the field for a game-high 20 points. (For the Reporter/Dawn Harrison)

VINCENT – Through nine games, the Vincent Yellow Jackets have looked like one of the best basketball in the 2A ranks and it’s led to the them earning the No. 1 ranking in the classification.

On Thursday, Dec. 7, Vincent put that No. 1 ranking to the test by hosting 5A county foe Shelby County.

While the Yellow Jackets (8-1) didn’t outscore the Wildcats by more than three points in any quarter, they were able to consistently wear them down by outscoring the visitors in three of four quarters to pick up a 61-54 win.

Chris Hardie, who has been one of the better players in the county so far this year, was a big reason why yet again. The junior posted 20 points on an impressive 7-for-7 shooting performance from the field, while also four rebounds.

That strong shooting started as a team for the Yellow Jackets in the first quarter as they shot 5-9 from the field, two of which were made 3-pointers.

It led to them slightly outscoring Shelby County 12-10 in the period.

The second period was played much tighter thanks to strong defense from both teams. Vincent only got five more shots up for the second quarter in a row, but only shot three 3-pointers making just one, which limited the Jackets’ scoring.

The Wildcats’ defensive pressure also led to six turnovers in the quarter, which led to Shelby County posting 12 points in the period. With Vincent also scoring 12, the Yellow Jackets were able to take a slim 24-22 lead into the half.

Coming out of the half, both teams posted their best offensive quarters of the game in the third quarter, which seemed to be a prelude to an exciting fourth quarter.

For the third consecutive quarter, the two teams battled to within two points as Vincent narrowly outscored the Wildcats 14-12 to extend its lead to 38-34 heading to the final quarter.

A large reason Shelby County was able to stay in the game was because of the Yellow Jackets’ free throw shooting as they went just 5-11 from the line in the third period.

It led to an extremely exciting fourth quarter, however, thanks to 43 combined points between the two after scoring just 72 combined up to that point through three quarters of play.

Vincent missed six more free throws in the final quarter, but also made five more, which was the difference maker. The Yellow Jackets went on to outscore Shelby County 23-20 in the final frame to hang on for a tightly contested 61-54 win.

Shelby County was led by Nathan Bates with 19 points. He shot 6-18 from the field and 5-12 from beyond the arc. A total of six different players scored for the Wildcats with all having four or more points in the game.