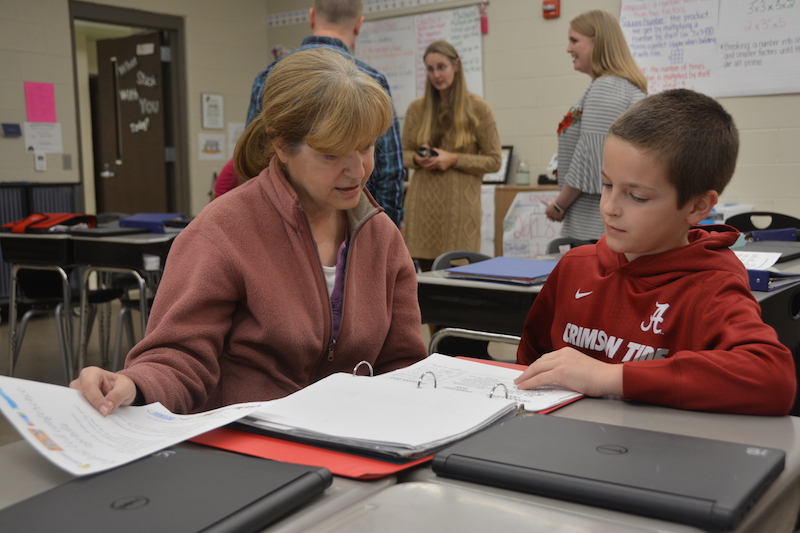 PELHAM – Students at Pelham Ridge Elementary School took pride in showcasing their accomplishments to their parents at the school’s first student led conference of the school year on Thursday, Dec. 7.

Students third through fifth grade participated in the conferences. This is the second year the school has conducted student led conferences.

At the beginning of each school year, students K-5 get a binder that tracks their progress throughout the school year. During the student led conferences, students talk to their parents about what’s in their binder.

Each teacher provides their students with a copy of an outline with talking points to help them stay on track with their conversations. Each teacher adapted the process to their grade level and their students.

Fifth grade teacher Christy Downing said the binders also provide space for pictures, and autobiography, a celebration section and much more. The contents of the binder builds throughout the school year.

The conferences fall in line with the school’s Leader in Me curriculum, which encourages children to take ownership of their education.

Downing said the conferences serve as an opportunity for students to shine.

“It’s also a great time for them to have conversations with their parents if they need help in a certain area,” she said. “And it’s not just about academics – students talk about extracurricular stuff, too. The whole process is designed to be very low stress.”

Fifth-grader Kyle O’Neil said he likes the student led conferences. He attended the conference with his mother Judy O’Neil.

“I like how we have a designated time and day to do it,” he said. “We take our binders home but we get distracted and we don’t get around to it, so it’s good to have time set aside to do it.”

Kyle said his favorite part of the conference was showing his mother his math goals.

“My math goal is to solve division problems with decimals with 85 percent correctness,” he said. “I’m going to practice 4 out of 7 nights a week. Doing it this way doesn’t make me as nervous as a conference with my teacher because it’s with a family member.”

Judy O’Neil said her son is sticking to his goal.

“He is actually practicing at home,” she said. “It’s nice because it’s a chance for me to come into the classroom and he gets to explain what he’s doing at school. I get to see that he’s being a responsible student.”

Downing said the school will have another student led conference in the spring that will be for Kindergarten through fifth grade students.