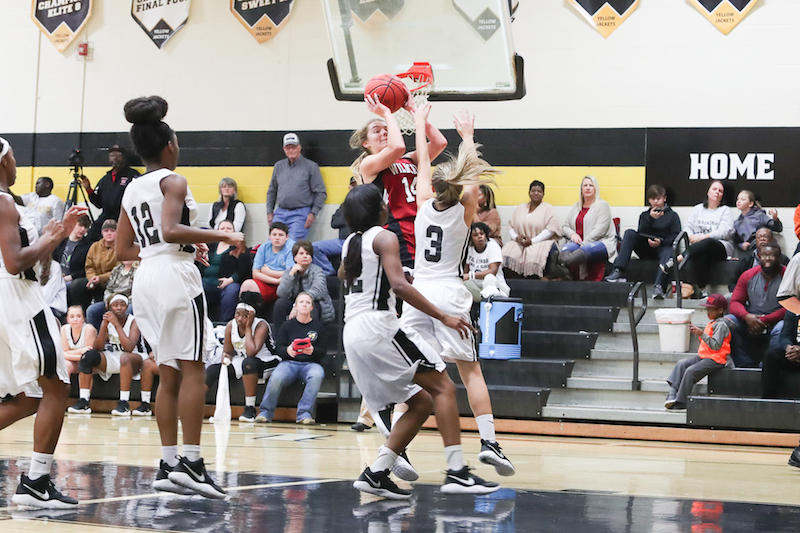 Shelby County’s Maggie West shoots a jump shot over the outstretched arm of the defender. She went on to post a game-high 16 points in the win for the Wildcats. (For the Reporter/Dawn Harrison)

VINCENT – Shelby County’s girls basketball team continued its successful start to the 2017-18 season when they traveled to Vincent Middle High School on Thursday, Dec. 8 to take on the Vincent Yellow Jackets.

Behind a strong defensive effort and 16 points from Maggie West, the Wildcats were able to pick up an easy 46-11 win over the Yellow Jackets.

Shelby County came flying out of the gates with 23 first-quarter points thanks to nine points from Aaliyah Cotton, seven from West, four from Madison Purcell and two from Skye Knighten-Lilly.

It wasn’t just the offensive end where the Wildcats showed up to play, but on the defensive end as well. Shelby County held Vincent to just two points in the opening quarter because of the complete effort put forth.

That successful play carried over into the second quarter for Shelby County scoring 13 more points and limiting the Yellow Jackets to just two made shots to take a 36-6 halftime lead.

West had six more points in the quarter thanks to two 3-pointers. In all, the Wildcats drained five shots from beyond the arc in the first half of play.

Not much was needed in the second half with the 30-point lead, but Shelby County continued playing tough defense and limited Vincent to just four more points in the third period.

The Wildcats were able to score 10 more points behind four different scorers to extend their lead to 46-10 heading into the fourth quarter, which meant a running clock for the remainder of play.

The Wildcats were unable to score the remainder of the way, but didn’t need any more points after building up a 36-point advantage. They limited Vincent to just one point in the final frame to hold on for the easy 46-11 win.

Behind West with 16 points was Cotton, who posted nine points in the win. Knighten-Lilly and Purcell also made big contributions with seven points apiece.