Xan Shivers, 21 and a senior art major at the University of Montevallo, discovered that her years of working with the Boys and Girls Club of Central Alabama was preparing her for what she intends to be her career.

She “found” herself at Disney World. 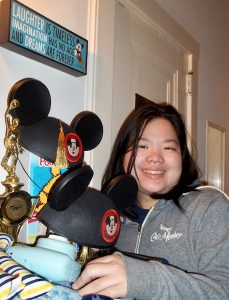 Shivers spent January through August at Disney World in Florida as an intern in the Disney College Program. One of the skills Disney interviewers seemed most interested in, she said, was that “I had experience working with children … and with parents.”

After the internship experience, Shivers said, she is determined to go back to Disney when she graduates a year from now.

“It is such a wonderful company,” she said. “The whole goal of Disney World is to make people happy.”

That is a concept to which Xan easily relates with her warm smile and cheerful demeanor. And Disney has long been a part of her life.

A hallway in the Shivers home is the backdrop for Disney excursion photographs of Xan at various ages and with various Disney characters: princesses in the first batch, Pluto in a later grouping, with the ubiquitous Mickey and Minnie all along the way.

Xan’s bedroom continues the Disney theme, with many treasured souvenirs, including a cased collection of Mickey Mouse watches put together by Xan’s mother. What jumps out immediately are the Mickey Mouse ears and the one special pair occupying a spot of honor above the others. This set of ears has a gold tassel … It is Disney’s version of a mortarboard for graduation from the college program.

She worked at the attractions in the Animal Kingdom, Shivers said, one-on-one with visitors, especially the children. “I loved to ask them how they liked a ride because they would get so excited telling me what they saw, like ‘We just saw the Yeti!’”

The Disney experience brought her a whole new perspective as one of the giant corporation’s employees, she said. There is nobody in the entire Disney organization who lacks what human resources professional like to call “people skills.”

For example: “The housekeeping people make the little mice out of folded wash cloths, and they can ‘paint’ Disney characters on the walkways with water or a broom,” she said.

For Xan, “the best thing that happened was the realization that this is where I belong. It’s something I’m good at, something I love.”

She is the daughter of Freda Shivers, director of the Boys and Girls Club program in Montevallo, who brought her from China when Xan was seven months old. She seems to have “inherited” her mother’s love for Disney, as well as her ability to lead with a smile. Meanwhile, back at the Boys and Girls Club, Xan gets a kick out of telling the children: “I work for Mickey Mouse.”

College students who think they might love Disney, too, can find out more about the program at: disneycollegeprogram.com.