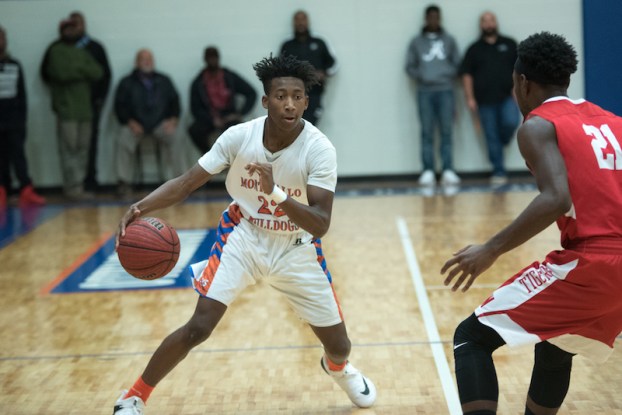 Montevallo is starting to hit its stride with a lot of young players. The Bulldogs picked up their first area win against Southside-Selma on Tuesday, Dec. 12. (Reporter photo/Keith McCoy)

SELMA – Montevallo’s boys and girls kicked off area play by traveling to Selma to take on Southside-Selma High School on Tuesday, Dec. 12, and neither could have drawn up a better start as each Bulldog team picked up its first area win of the 2017-18 season.

As the No. 9 team in the 3A standings, the girls continued their dominating ways by picking up a 54-29 win.

It was a bit of a rocky up and down first half for the Bulldogs (8-1, 1-0), who came out strong on both ends of the floor in the opening quarter. With their offense able to post 12 points in the period, that was more than enough as the defense stepped up to hold Southside to just five points.

That defensive effort escaped the Bulldogs in the second quarter, however, as Southside battled back into the game. They used a 16-10 run in the quarter to get within one, 22-21, at the half.

“I’m still looking for us to put together complete games without the lapse on defense,” Montevallo head coach Tena Niven said after the game.

For the second quarter in a row, Montevallo failed to get some consistency in the third quarter. While Southside failed to put up a ton of points, so did the Bulldogs as each battled to a 7-7 tie in the quarter, which led to a one-point 29-28 lead for Montevallo heading to the final quarter.

Clearly disappointed in the way the team played in the first three quarters, the Bulldogs’ players came out in the fourth quarter and played possibly its best quarter of basketball this season.

It started on the defensive end as Montevallo started playing much tighter to the pleasure of Niven. It led to them limiting Southside to just one point in the final period.

That strong defensive effort led to several easy opportunities on the offensive end of the floor and the Bulldogs capitalized with 25 points in the quarter to make the final score lopsided at 54-29.

Niven said the team finally turned up the defensive pressure in the final quarter and that was the difference maker in the game.

The Montevallo boys (5-5, 1-0) were also able to pick up their first area win of the season, but in much tighter fashion as the Bulldogs held on for a slim 35-31 win.

While the first quarter ended in the two teams knotted at 11 points apiece, it was a strong second quarter that won the game for Montevallo.

The Bulldogs were able to score 12 points in the period, which was the most from either team during any quarter, showing that offense was at a premium.

Montevallo limited Southside to just six points in the quarter as the Bulldogs were able to take a 23-17 lead into the half.

The remainder of the game didn’t see very much action on the offensive end of the floor. Montevallo came out and posted just 12 total points in the second half, six in each quarter.

Southside posted eight in the third quarter, which drew them to within four points at 29-25 heading to the final frame.

Luckily for the Bulldogs, their defense came to play and held Southside to less than 10 points for the third consecutive quarter in the final quarter.

Despite scoring just six points themselves, Southside also only posted six in the quarter.

Southside was inching closer in the final quarter before sophomore Jabrian Sullens grabbed an offensive rebound and threw down a monstrous dunk to seal the 35-31 win.