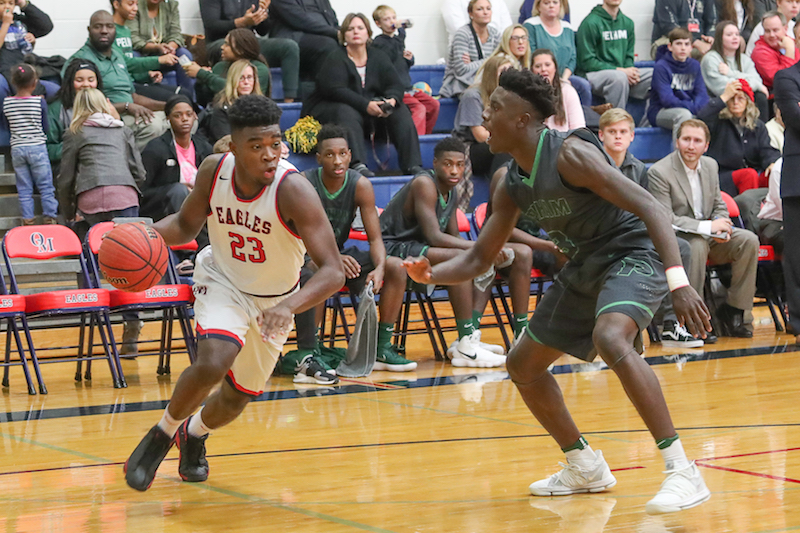 Oak Mountain's Chris Mayweather looks to drive on Edward Gipson of Pelham early in the game. Mayweather ended the game in double figures as the Eagles' second leading scorer. (For the Reporter/Dawn Harrison)

NORTH SHELBY – Despite a slow start defensively, the Oak Mountain Eagles turned up the pressure in the second half and forced four consecutive turnovers by Pelham on its last four possessions of the game.

The fourth of those turnovers came with the Eagles and Panthers tied 51-51 with 3.7 seconds left on the clock as Pelham was looking to hold for the final shot. Instead it was Oak Mountain that got the final shot thanks to the defensive effort.

Out of a timeout, Luke Jasinski inbounded the ball on the sideline just in front of the visiting bench. He found Drew Dunn at half court, who immediately turned around and sprinted toward the goal with a purpose.

That purpose was to win the game. After Pelham defender Justin Allison tripped over Dunn’s foot, Dunn stepped an inch inside the 3-point line and with his momentum still carrying him toward the goal, he released the jump shot with no time left on the clock.

The shot carried traveled toward the goal before finding nothing but the bottom of the net, sending Dunn, his teammates and the fans in a frenzy of celebration after picking up a buzzer-beating 53-51 win over the Panthers to avenge a loss in the Eagles’ first game of the season.

Pelham (5-4) ended up responding to Oak Mountain’s fast start with an offensive explosion the remainder of the half.

The Panthers ended the quarter on a 9-0 run after Grayson Dill hit a 3-pointer with five seconds remaining to give Pelham a 13-10 advantage at the end of the first quarter.

That run eventually extended to 15-0 to give the Panthers a 20-10 lead before Dunn hit a crucial 3-pointer with 6:00 left until the half.

Oak Mountain eventually got within six at 24-18, but Pelham’s balanced attack on the offensive end led to an 11-point 36-25 lead at the break.

Allison hit four free throws and a floater to gather the Panthers’ last six points of the second quarter. After combining for 23 points in the opening period, the two teams combined for 38 in the second.

Coming out of the halftime break, it was evident the Eagles wanted to play better on the defensive end and they did just that.

They were able to hold the Panthers to just six points in the third quarter, while scoring 13 of their own to get within four points at 42-38 heading to the final quarter.

“I screwed us up in the first half with what we were trying to do defensively,” Love said. “In the second half we just went straight to our man to man stuff and guarded them. The kids just busted their tails off and showed a lot of resiliency.”

It didn’t take long into the fourth quarter for the excitement to continue for Oak Mountain. Early in the quarter, Chris Mayweather threw down a dunk that ignited the crowd and the Eagles as they were within two points.

Shortly after, with 6:15 remaining in the game, Dunn hit yet another big 3-pointer to give Oak Mountain its first lead, 45-44, since it was 10-8 in the first quarter.

Behind a Nathan Jones offensive board and put back, a Carson Bobo hook shoot and a Mayweather put back off of his own steal, Oak Mountain stormed back to tie the game.

All three of those scores came off of three straight turnovers by Pelham, before a fourth consecutive turnover led to Dunn’s game-winner at the buzzer.

“I keep telling them they have a chance to be special and maybe this will get them believing just a little bit more,” Love said.

Dunn led the Eagles with 20 points in the game. All but his last shot came on 3-pointers and his foot was just on the line preventing seven made 3-pointers.

Pelham got a balanced attack as well, led by Allison with 15 points. Jacob Shumate had an extremely impressive night with 10 points, while Chris Brown continued to score in double figures with 10 points as well. Edward Gipson added seven points and Grayson Dill posted five.