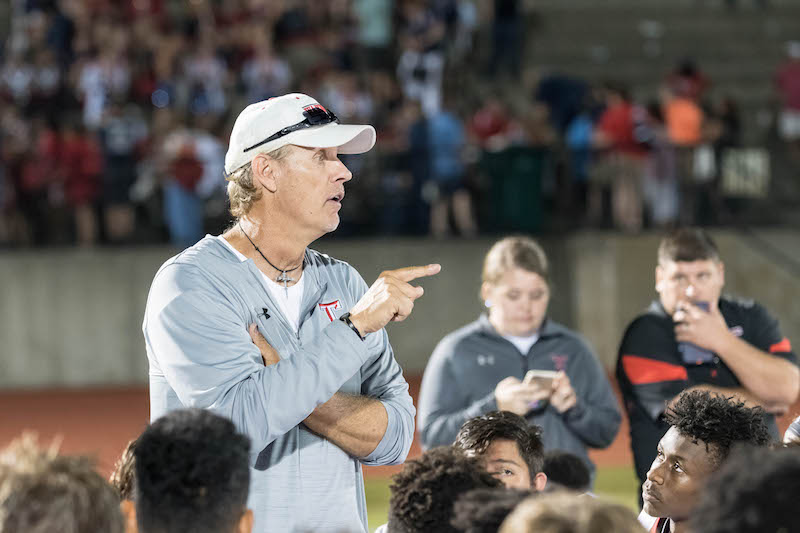 Thompson head coach Mark Freeman has been named the 2017 Shelby County Coach of the Year after leading the Warriors to one of its most historic seasons in school history. (Reporter photo/Keith McCoy)

ALABASTER – Ahead of the 2015 football season, Thompson High School made the decision to hire Mark Freeman as its head football coach moving forward.

Freeman took over a team that had gone 0-10 that season, looking to give a community and program starving for success a boost of energy and belief.

In just three years, Freeman gave that hungry fan base and football team just what it desired so much after taking them from 0-10 to back-to-back 5-5 seasons to most recently a 12-1 season and an appearance in the semifinals of the 7A playoffs in 2017.

His efforts of leading his team from a dark period to a championship level in just three short years has been nothing short of amazing and earned him a more than deserved 2017 Coach of the Year honor in Shelby County.

“I’m just so blessed,” Freeman said. “I’m so lucky to get to coach football for a living and to have an impact on these kids and coaches that I get to work with every day. They are the reason this program has turned around. We’ve got guys here that genuinely care about each other and want each other to succeed.”

Other coaches also had strong chances at winning the award starting with Vincent’s Wiley McKeller. In his second season with the Yellow Jackets, McKeller has taken his team from 1-19 the last two years to 5-5 this season.

Vincent just missed out on the playoffs after losing its final three games of the season due to the injury bug.

Briarwood head coach Fred Yancey, who we desperately hope continues his successful career in 2018, was also in the running.

After winning the last two coach of the year honors in the county, Yancey was close to earning a third in a row after leading the Lions to the state championship game and an overall record of 14-1.

Those two coaches along with Calera’s Andrew Zow, were strongly considered throughout the year, but what Freeman was able to do this season was just too much to ignore.

Thompson ended the season with the school’s first ever win over Hoover, the school’s third trip to the semifinals of the playoffs, first playoff berth since 2007, first trip past the second round of the playoffs for the first time since 1987, first region championship in 20 years and best finish since 1982.

“This season is going to put a lot more belief and expectation in them,” Freeman said. “We were close to having that kind of season a year ago and now that we’ve had it, it gives them the belief that being average isn’t ok. They’re going to want to work even harder now so they can exceed the previous year’s success. It’s built some solid stability into our program.”

It was a 2017 season where the team finished perfect in what is considered one of the toughest regions in the state where they have to compete against the likes of Hoover, Spain Park, Oak Mountain, Vestavia and Mountain Brook.

“We didn’t have the goal of going undefeated in region play when we got here because that’s almost unheard of in this region,” Freeman said. “You can finish with two or three losses in this region and still be competing for a state championship. As long as you make the playoffs you’re going to have a strong chance coming out of this group of teams. So to do what we did this year was special.”

Freeman credited this year’s success to a strong group of coaches and players that bought in to what the team was trying to accomplish.

“It starts with my staff,” Freeman said. “I was able to bring good men in here with me to help coach this team. They genuinely care about each other and these kids. The players see that and work hard for them and enjoy being around those guys. All of the success starts there.”

He also said, while winning and succeeding on the football field is nice, hearing about kids helping out others with special needs, or opening doors for other students and teachers means a whole lot more because it shows the affect the game of football is having beyond just the field of play.

Thompson loses several key playmakers next year including, Ahmad Edwards, Mo Edwards, Jalen Rayam, KJ Robertson, Myles Brown and Mackie McNeal; but Freeman said this team will be just fine moving forward because of the belief that has been instilled.