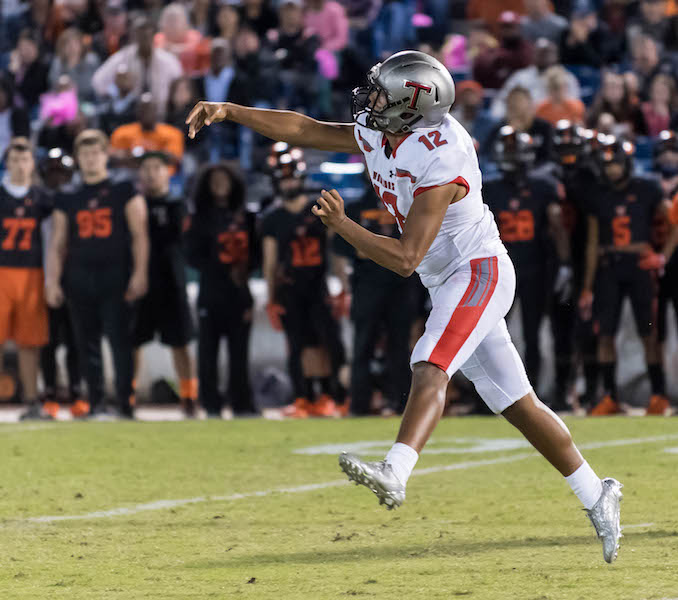 Thompson's Taulia Tagovailoa was named the 2017 Shelby County Reporter Player of the Year after passing for 3,823 yards and 35 touchdowns this season. (Reporter photo/Neal Wagner)

It’s a trip Thompson quarterback Taulia Tagovailoa and his family made last offseason to join the Warriors’ football team as they looked for the perfect fit to be close to older brother Tua Tagovailoa, who is a freshman quarterback at the University of Alabama.

Taulia didn’t take long to shake off the jetlag as he made his presence known in the state of Alabama posting 3,823 yards and 35 touchdowns through the air in 2017.

The Junior quarterback narrowly edged out John Parker Wilson for third all-time in AHSAA history for passing yards during his first season with the Warriors after averaging 294.07 yards and 2.3 touchdowns per game—numbers that have now led to him being named Shelby County’s 2017 Player of the Year.

“I think it was just God’s plan for me to be brought here and coached by (head coach Mark) Freeman,” Taulia said. “Coming out here has just been a huge blessing for me and my family. All of the people around here and in this community made the transition really easy for me and I’ve been having a lot of fun.”

Several players were considered for the honor including two other Thompson players in Ahmad Edwards, who set a state record for receptions with 118, and Jalen Rayam, who led the county with 143 tackles and 28 tackles for loss.

Players like Chris Hardie, who led the county in rushing, and Gabe Russell the leader of the best defense in the state at Briarwood were also considered heavily.

In the end, Taulia was just too much of a difference maker and played an integral part in a record-setting season with Thompson.

Last season, the Warriors were a player away from being undefeated heading into the Hoover matchup having lost three games by three points or less.

This year Taulia made sure that was the case as he was the one player who meant more to his team than anybody else in the county.

“I just wanted to be the best teammate I could be this year,” Taulia said of his success this season. “I wanted to lead to the best of my ability both on and off the field. The goal was obviously to get a ring, but it was still a lot of fun to be a part of this group this year.”

The leadership by which Taulia carried was second to none on this team and showed up from the very first day. He arrived late in the spring and within two weeks, Freeman was already commenting about how all of the players were welcoming him and how he had won over the locker room within the first week of being there.

“When I first came here, the locker room greeted me like I was their own brother and like they had known me for a long time,” Taulia said. “They respected me before they even met me. I think that really helped me become a leader and more comfortable from the start.”

It’s something that Taulia said helped grow his confidence throughout the year along with the support of the community.

“It really meant a lot to me to see the community happy,” Taulia said. “Before I came here, I heard the community was looking for some excitement and success in football, so it’s been cool to see our team be able to give them that this season.”

While Taulia said he didn’t focus on any games in particularly, he did say how important the Hoover game was to the fans and how happy everyone was after picking up the school’s first win in school history over the Buccaneers.

The loss to Hoover in the semifinals, however, was one of bitterness that still stings, but one that Taulia said will fuel him moving into 2018.

“It hurt,” he said. “With all of the hard work we put in all summer and throughout the season made that really hurt. I think I just used it as motivation for next year for sure and that’s how I was able to get past it.”

While Thompson loses several playmakers, including Ahmad and Mo Edwards, Taulia’s top two targets; he still feels confident in this team’s ability saying very quickly that “winning it all,” is the goal next season and he thinks it’s an attainable goal.

Taulia said he has benefited from playing under Freeman this year, who has helped him become a much better quarterback than he was prior to playing at Thompson.

He’s excited to “pound the weights” this offseason and put in even more work to possibly become the best quarterback in the state of Alabama next season as he and the Warriors look to redeem a heartbreaking loss that left them one game short of a state championship in 2017.