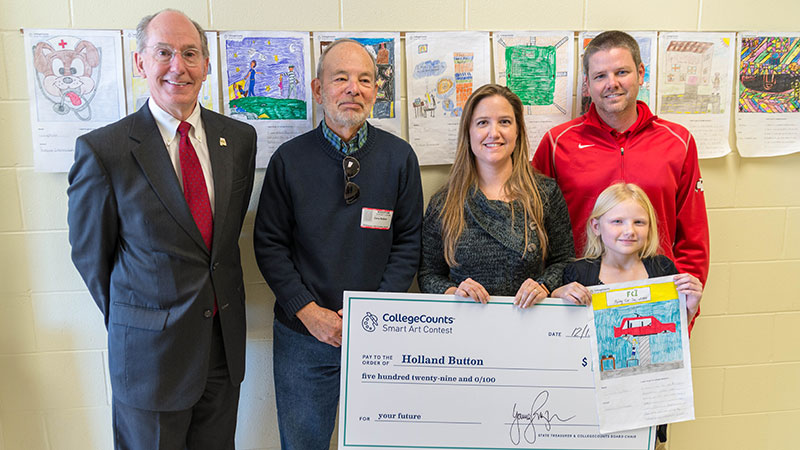 ALABASTER – Though she is only in fourth grade, Thompson Intermediate School student Holland Button already has a jumpstart on – and a solid plan for – her future.

Button’s passion for her future career is now paying off, literally, as she was recently named one of three statewide winners of the Alabama Treasurer’s Office Smart Art contest, which is administered through the office’s College Counts 529 program.

Through the contest, thousands of fourth-graders from throughout the state submitted artwork and a short essay explaining why they want to attend college when they get older. Each county then selects a winner and sends the winning entry to the State Treasurer’s Office for consideration for the state prize.

This is the Smart Art contest’s second year, and a Thompson Intermediate School student has been one of the state winners both years.

Button’s artwork depicted her detailed plans to found the “Flying Car Inc.” company in 2030 to give people a chance to safely take to the skies in their own vehicles.

“Judging is extremely difficult, because we’ve got a lot of talented students in Alabama,” said State Treasurer Young Boozer, who came to TIS on Dec. 13 to congratulate Button and present her with a $529 check to start her College Counts 529 savings account. “Her entry was amazingly sophisticated for a fourth-grader. Her family, teacher and school should be proud of her.”

Funds may be withdrawn and used at colleges, universities, trade schools and graduate schools at one-, two- and four-year schools in Alabama and across the nation, according to the State Treasurer’s Office. Under the 529 Section of the tax code, special tax benefits are provided to families saving for future college expenses. Alabama taxpayers may receive a generous state income tax deduction of up to $10,000 for married couples filing jointly ($5,000 for single filers) on contributions to CollegeCounts each year.

“Our teachers here at TIS have done a great job of making this (College Counts 529 program) a priority for our students,” said ACS Superintendent Dr. Wayne Vickers. “The state has done a wonderful job about getting the word out about this program. Hopefully, it gets kids thinking about their future.”