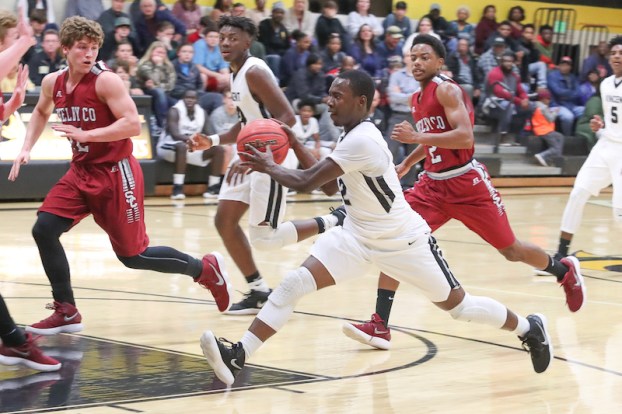 Zavien Kelley makes a move to the basket earlier this year against Shelby County. He scored 11 points against Jemison, while adding six rebounds, six assists and four steals. (For the Reporter/Dawn Harrison)

JEMISON – After a 1-1 start to the season, the Vincent Yellow Jackets picked up their eighth consecutive win on Monday, Dec. 11, thanks to a dominant road effort at Vincent that led to a 59-30 win over the Panthers.

The impressive effort started in the first quarter when Vincent was able to double up Jemison by outscoring them 12-6.

While the offense struggled slightly in the opening period, shooting 5-18 from the field (27.8 percent), the defense picked up the slack. The Jackets were able to get four steals and 12 rebounds in the quarter, six of which came on the offensive end.

Vincent had a small momentary lapse on the defensive end of the floor in the second quarter allowing 13 points, but the offense was able to post 16 of its own to take a strong 28-19 advantage into the half.

The reason for the improvement on the offensive end of the floor was a much better field goal percentage in the second half as the Yellow Jackets shot close to 30 percent better going 7-13 from the field.

That spurt in the second quarter, seemed to give Vincent more confidence on both ends of the floor coming out of the halftime break.

It led to the Yellow Jackets getting six second chance looks thanks to six offensive boards and also eight points off of turnovers as defense led to offense during the quarter.

Vincent was able to post its most dominant quarter of the game with the team clicking on both ends of the floor as they outscored Jemison 16-4 in the period to take a 44-23 lead into the final frame.

That trend carried over into the fourth quarter as the Yellow Jackets were able to tack on 15 more points and limit Jemison to just seven points to create the final of 59-30.

All of that led to five different players scoring in double figures in the game, which seems to have become the norm.

Kelley added six rebounds, six assists and four steals as well. Hardie ended the game with another double-double performance posting 10 rebounds in addition to his 11 points and also picked up three steals. Hamilton added five assists to his point total, while McGinnis shot 5-9 from the field and had six rebounds.

By ALEC ETHEREDGE | Sports Editor VINCENT – Through nine games, the Vincent Yellow Jackets have looked like one of... read more