Helena bounces back from loss to notch tenth win of season 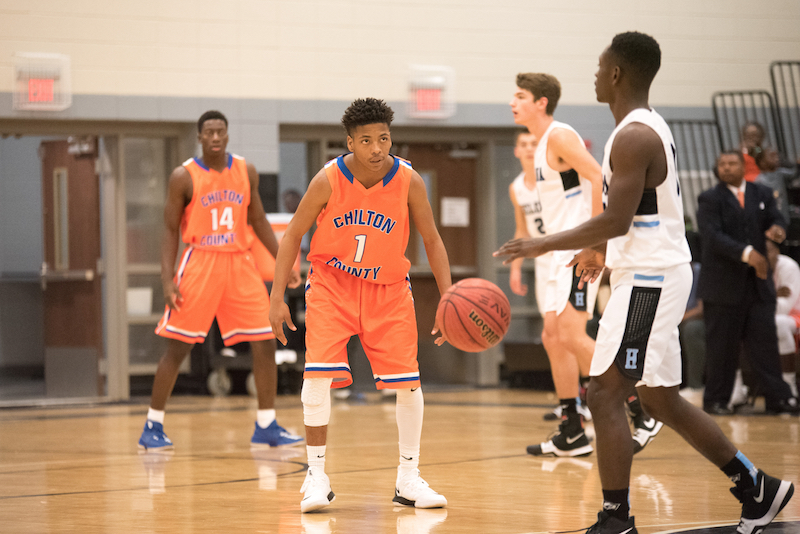 Helena earned its tenth win of the season on Dec. 14, as the Huskies used a strong second half to pull away for a 52-35 win over Chilton County. (Reporter Photo/Keith McCoy)

HELENA–After suffering its first loss of the season on the road against McAdory on Dec. 11, the Helena Huskies boys basketball team had a chance to rebound against Chilton County on Thursday, Dec. 14.

The Huskies used a strong second half by outscoring the Tigers 30-14 to earn its 10th win of the season with a 52-35 win to get back in the win column.

The first time these two teams met this season, it was Austin Laatsch that led the Huskies with 11 points including three 3-pointers in a 54-32 win.

On Dec. 14, it was Caden Pierce who filled that role for Helena, as he drained four first half 3-pointers and finished with 16 points to lead all scorers.

The first half was a slow go for the Huskies, as Pierce accounted for 12 of Helena’s 22 first half points. The Huskies took a slim 22-21 lead into the locker room.

Helena head coach Chris Laatsch said it was important to hit some of those shots behind the arc before halftime.

“Caden had four threes in the first half and I thought that was huge because that’s what gave us the lead,” Laatsch said. “If he doesn’t hit those… we were struggling scoring and it kept us in the game. I think we’re a really good 3-point shooting team but we haven’t been shooting them great lately so hopefully making a few tonight will help propel us as we move forward.”

The biggest turning point in the second half was the effectiveness of Helena’s press defense creating easy baskets and the emergence of senior Justin Stuckey offensively.

Stuckey, who is typically a top scorer for Helena, was held scoreless in the first half but came back strong in the final two quarters to finish with 15 points. Stuckey scored 11 of Helena’s 18 points in the third quarter.

Leading by 13 at the end of the third quarter, the Huskies had a big enough cushion to close out the game without any issues to remain unbeaten at home.

“Once we score we can get into our press and I thought our press was pretty good at times tonight in stretches with certain lineups,” Laatsch said. “I thought our kids played really hard and created some turnovers and allowed us to get the 18-6 third quarter.”

In the paint, Helena’s Deven Tucker finished with nine points for the Huskies and Chilton County’s Patrick Rodgers was the lone Tiger to finish in double digits with 10 points.