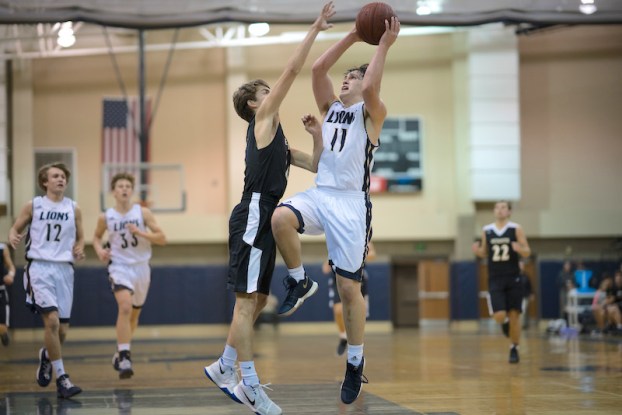 Briarwood welcomed back its football players in a win over Montevallo. The Lions scored 27 of their 61 points from 3-point range. (File)

Lions move to 5-2 with win over Bulldogs

MONTEVALLO – The Lions received some much-needed help just in the nick of time for a road win over the Montevallo Bulldogs Thursday night, Dec 15.

“We got our football players back tonight so at times it looked pretty rough and rugged,” said BCS head coach Bobby Kerley. “It’s going to take a while for us to really gel and start clicking, but we saw some glimpses I think of what we can hope to see in the future.”

Montevallo came out of the gate strong, fueled by senior leader Jamarcus Green who scored eight of the Bulldog’s 16 points in the opening period.

MHS took their biggest lead of the night, 18-11, after a Jabrian Sullens layup, but offense was hard to come by for the remainder of the game.

Most of that due to the Bulldog’s inability of secure the basketball, committing 15 turnovers in the first half, which allowed Briarwood to climb back in it.

The Lions also caught fire from long range hitting five shots from beyond the arc. Jack Dicen’s fourth three pointer of the half gave BCS a 28-26 edge going into halftime.

The teams battled hard in the opening minutes of the second half, trading baskets as Montevallo clung to a 31-28 lead off several offensive rebounds.

However, Briarwood began to find their rhythm with a little help from the football team. Former quarterback Michael Hiers certainly didn’t look like a guy who had lost a heartbreaker in the 5A state championship less than a week ago.

Hiers found his long range accuracy as well hitting four of his five 3-pointers in the second half as the Lions outscored the Bulldogs 33-12 over the final 14 minutes of the game.

Briarwood scored 27 of its 61 points from downtown.

“One of our main focuses is our spacing on the floor,” Kerley said. “Early on we were all jumbled up, everybody’s kind of playing helter skelter. We relaxed, we calmed down, we focused on being in the right spots on the floor so that when we did attack they had a much longer way to recover. And we’ve got a pretty selfless team and they know where to find our shooters.”

Hiers led three of his teammates in double digits with 20 points on the night while Green led Montevallo with 17, respectively. Sullens also had a great all-around night for the Bulldogs with eight points, 14 rebounds and six blocked shots.

Montevallo’s boys are also done until their January 9th date with Montgomery Academy while BCS will join their girls team tonight against Chelsea playing at 7:30 p.m.