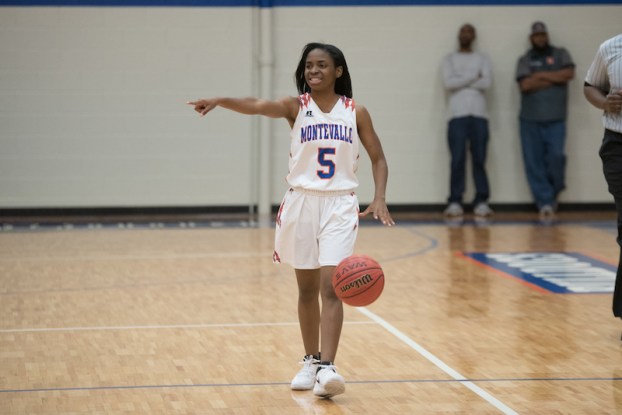 Montevallo picked up an easy 57-28 win over Briarwood to move to 9-1 on the season. (File)

MONTEVALLO – The Lady Bulldogs continued their dominant start to the 2017-18 season notching their third win in a row with a 57-28 win over the visiting Briarwood Lions Thursday, Dec 14.

The win runs Montevallo’s record to an impressive 9-1, while Briarwood dropped to just 2-5 with its third straight loss.

The game’s first quarter was a competitive back-and-forth affair as both teams used a full court press to force turnovers.

“That’s kind of our mentality,” said head coach Tena Niven. “In order for us to get going on defense we almost always have to press to get them going. So we came out with a purpose of being disciplined in our press. Not necessarily to steal the ball, but to make them slow it down and force a mistake so we don’t have to make a play.”

The Bulldogs took a narrow 15-13 lead into the second quarter, but their defensive pressure got to the Lions—who turned the ball over 13 times in the first half.

The turnovers keyed the Bulldogs best quarter outscoring Briarwood 16-5 during that span including an 11-0 run going into halftime.

Lauryn Lilly scored eight of her team-leading 24 points in the quarter and the Bulldogs never looked back.

“I was actually yelling at her for not going to the rim more,” said Niven. “She’s not a selfish player so she’s hesitant sometimes, but it was nice that others stepped up to carry the load tonight.”

Montevallo had a balanced effort on offense with four players scoring in double figures, forced 19 turnovers in the game and cleaned up on the glass allowing just three offensive rebounds.

Forward Tekay Hill was a force inside as usual grabbing a double-double with 12 points and 13 rebounds. Morgan Hutchinson led BCS with 10 points on the night.

The victory finishes off the first half of Montevallo’s season, which will resume January 9th when they host the Eagles of Montgomery Academy. Briarwood will get another shot tonight as they visit the Chelsea Hornets at 6 p.m.