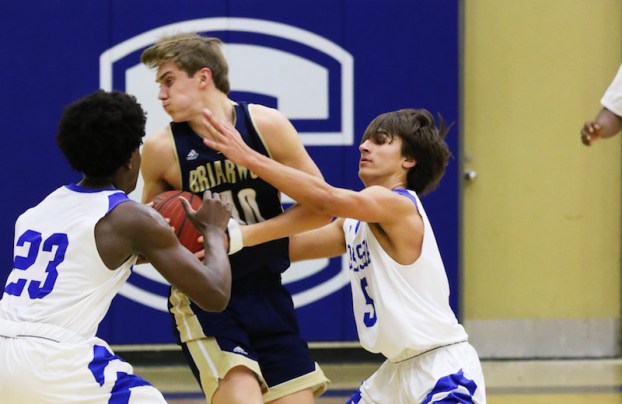 In a physical game of defense and fouls, Briarwood was able to make a late surge to beat Chelsea 53-45. The Lions moved to 6-2 on the season with the win. (For the Reporter/Cari Dean)

CHELSEA – The Briarwood/Chelsea rivalry matchup is one that may get lost among others around the state, but in Shelby County it’s known as one of the most intense and heated rivalries around, and there was plenty of evidence to support the fun but fierce rivalry when the two met on the hardwood at Chelsea High School on Friday, Dec. 15.

With both student sections out in full force chanting back-and-forth at each other every chance they got, including one Chelsea student wearing a St. Paul’s T-shirt to get under the skin of the Lion players and faithful who had just lost a state championship game to the Saints a week earlier, the atmosphere was set from the opening tip.

And that intenseness from the crowd carried over to the court as the two teams went on to combine for 46 total fouls and 55 total free throws in the game.

Chelsea, however, was on the wrong end of those numbers picking up 27 total fouls to Briarwood’s 19 and shooting just 6-19 from the free throw line, while the Lions were 22-36. Those numbers were just too much to overcome as Briarwood used a late surge to pull away from the Hornets in a 53-45 win.

In the early going, neither team was doing anything special on the offensive side of things, mainly due to the physical and fast defense on the other side thanks to both teams hustling to the ball.

With neither team sustaining a run in the opening period, Briarwood (6-2, 1-0) was able to take a slim 10-7 lead at the end of one, thanks to two 3-pointers, one from Jack Dicen and one from Michael Hiers.

That slow pace continued for most of the second quarter as well, until both combined for 14 points in the final 3:00 of the period. It led to a 13-13 tie in the quarter and a 23-20 lead for Briarwood at the half.

Despite neither team being able to sustain a run again in the third quarter, the fouls started playing a major factory.

The Lions made just two baskets in the period, but outscored Chelsea 13-7. Briarwood was able to shoot 14 free throws and made eight of those 14; while Chelsea (6-5) was 1-2 at the line in the frame.

It led to the Lions grabbing a 36-27 lead heading to the final quarter of play.

Despite a late push with a couple of good inbound 3-point plays from Chelsea, Briarwood was able to hang on for the 53-45 road victory.

Another big help for the Lions in the win was the return of Michael Hiers and Carson Donnelly after the football team’s run to the 5A state championship game.

Hiers and Donnelly missed the first six games of the season due to that obligation, but have now returned, and despite injuries to both players’ hands; they led the Lions to two consecutive wins in back-to-back nights.

Hiers posted 15 points in the win over Chelsea, while Donnelly added 14. Izaiah Jones poste an additional seven points from the point guard position.

Chelsea was led by Matthew Lanzi and Nyles Macon, each with 11 points in the loss.

By ALEC ETHEREDGE | Sports Editor CHELSEA – It’s been a tough start to the new basketball season for the... read more