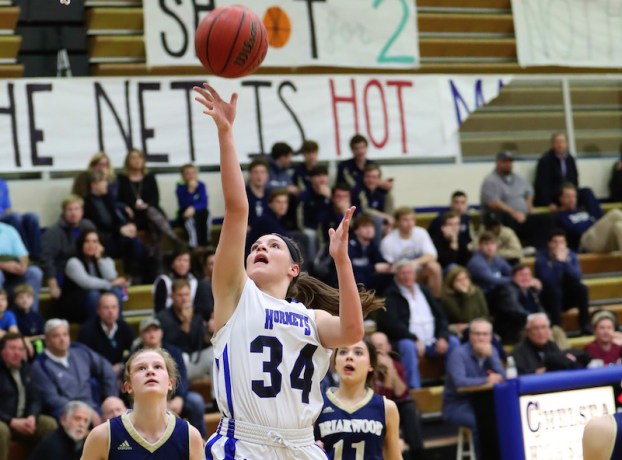 Chelsea's Michaella Edwards lays the ball in during the win over Briarwood. Her 28 points helped the Hornets pick up their first win of the season. (For the Reporter/Cari Dean)

CHELSEA – It’s been a tough start to the new basketball season for the Chelsea Hornets after a successful 2016-17 year, but on Friday, Dec. 15, the Hornets finally got in the win column thanks to a 65-37 win over Briarwood.

Coming into the matchup at 0-10 so far in 2017, Chelsea was looking for a spark to get themselves going heading into the important part of the year—post-Christmas area play.

The Hornets (1-10) got that spark on the defensive end of the floor. Despite 29 turnovers themselves, which has plagued Chelsea all season, the Hornets were able to pick up 13 steals and 23 of their 28 rebounds on the defensive side of things.

It led to Briarwood (2-6) being held to less than 10 points in three of the four quarters, while Chelsea scored 10 or more in every quarter of the game.

Both teams were a little slow coming out of the gates, combining for just 18 points, a quarter low for the two in the game.

Chelsea, however, was able to grab the early 10-8 advantage at the end of the first quarter thanks to a 6-8 mark at the free throw line.

After scoring six points in the first quarter, Michaella Edwards turned up the heat even more for Chelsea in the second period by posting 10 more points.

That combined with the defense limiting Briarwood to just six points offensively led to Chelsea taking a 27-14 lead into the half.

Coming out of the locker room, both defenses turned up the pressure, specifically the Lions after a slow second quarter.

The Hornets still managed to edge out Briarwood 11-9 in the quarter to extend their lead to 38-23. The Lions missed three free throws in the quarter that would have given them their first double-digit quarter of the game and cut the deficit by a couple of points.

Instead, Chelsea took advantage of the momentum they continued to boast and played one of its best quarters of the season in the fourth quarter.

Behind five different players, the Hornets were able to score 27 points in the final quarter of play, including making seven free throws down the stretch to ice the game by the final score of 65-37.

Chelsea was led by Edwards with 28 points on 9-14 shooting. She also added six rebounds in the win. Hope Richard had a nice night as well, posting 16 points and eight rebounds, three of which were on the offensive glass.

Briarwood was led by Morgan Hutchinson with 21 points. She was able to knock down seven of her eight free throws, including a 7-7 mark in the fourth quarter, as she accumulated more than half of the team’s points in the game.

Helena bounces back from loss to notch tenth win of season

By GRAHAM BROOKS / Staff Writer HELENA–After suffering its first loss of the season on the road against McAdory on... read more