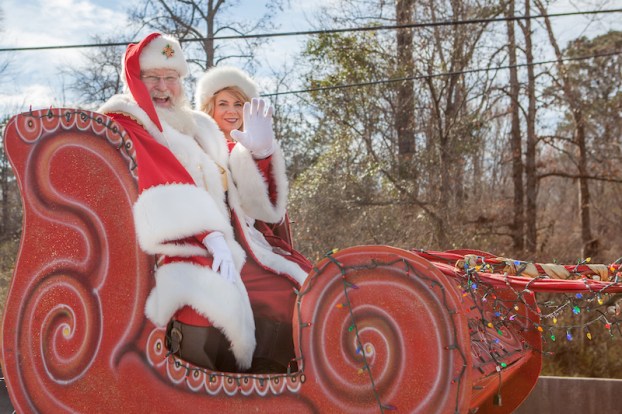 Santa and Mrs. Claus wave and throw candy from their sleigh at the Chelsea Christmas Parade. (For the Reporter/Kevin McKee)

CHELSEA – The city of Chelsea came together to celebrate the holidays at the city’s 18th annual Christmas Parade on Saturday, Dec. 16. Many students, local business owners and members of civic organizations represented their groups by marching or riding floats and throwing prizes to onlookers from Chelsea Middle School to Winn-Dixie. Hundreds of people lined Shelby County 39 to watch.

Chelsea Mayor Tony Picklesimer said the city traditionally holds the parade in mid-December to get residents ready for Christmas along with allowing the city to show off what it has to offer.

“It’s kind a kickoff for the Christmas season,” Picklesimer said. “It’s a great opportunity for businesses and civic organizations to showcase themselves, and it gives young people the opportunity to perform in front of a crowd.”

Picklesimer said Dec. 16 was a good day for a parade, with good weather and an even better turnout.

“The weather was beautiful, a terrific crowd and lots of Christmas cheer,” Picklesimer said.

Four-year-old cousins Peyton and Evie Lafferty, who came with their grandparents and Peyton’s brother, Cooper, said their favorite part of the parade was catching candy from the floats.

“I also got necklaces and a ball,” Peyton added. “I like it when they throw Tootsie Rolls. They’re the best.”

Cameron Hunsaker, who brought his sons, Payton and Preston, said they came to see his daughter perform with the Chelsea High School Color Guard. Both Payton and Preston said they also enjoyed seeing the horses and the rescue dogs that were featured in the parade.

“Having the open house right after the parade sets Christmas in Chelsea apart,” Picklesimer said.

Picklesimer said the event was family friendly, and gave kids the chance to get their faces painted by the “glitter fairies,” play in an inflatable bouncy house and meet Santa and Mrs. Claus, “Frozen” characters and Jack Sparrow.

According to Picklesimer, the city held its inaugural Christmas Open House in 2016 as a way to get residents acquainted with the then-recently-opened community center.

“This event was my wife, Cindy’s, idea. At the time, the community center was only one year old and a lot of people didn’t realize it was there,” Picklesimer said.

Additionally, the Yellowleaf Ridge Estates Homeowners Association held the Chelsea Christmas Village Arts and Crafts show from 9 a.m. to 2 p.m. at the end of the parade route. The Christmas Village featured local vendors and raised money for the HOA’s Dogwood Creek project.

Bobbie Gregg said the Christmas Village made it convenient for her to get some extra shopping done while also enjoying the parade.

“I had a few more Christmas gifts to give, and I wanted something unique,” Gregg said.

Picklesimer described the parade as, “one of the biggest, if not the biggest,” with about 90 floats. According to Picklesimer, this year’s Christmas events were “small-town America at its best.”

“We’re probably one of the biggest small towns to still have a parade,” Picklesimer said. “This is why we don’t live in the big city or in the heart of downtown Birmingham. This is a tradition that’s unique to a small town, and we’ve taken ours to the next level.”