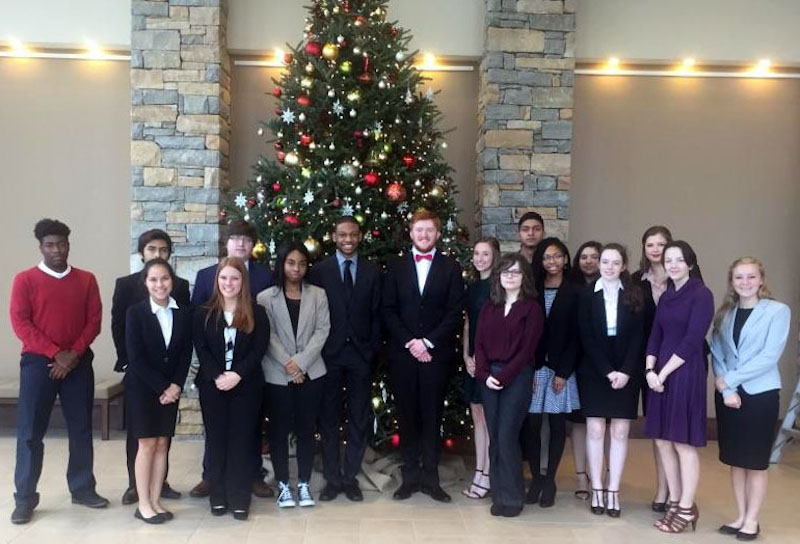 When Pelham City Schools launched academies in the 2015-16 school year, the Law Academy was a completely new concept. With veteran history teacher and PHS alum Karen Varner in charge, Law Academy began with energy and excitement.

“Mrs. Varner made the experience for me,” senior Brendyn Matthews said. “She is well-educated in law and government so she’s able to really help us grasp the material.”

Part of this academy’s curriculum is produced by We the People and designed to provide students materials to develop their expertise on the principles of U.S. Constitutional democracy. The culminating activity consists of simulated congressional hearings where student experts compete as if they’re testifying before Congress with the competition judges playing the roles of Congressional leaders.

On Dec. 4 and 6, the Law Academy hosted community forums presenting on contemporary issues including civil liberties, prevention of violence and school safety. Knowing that the students viewed each topic through the lens of their knowledge of U.S. Constitutional law reveals that applying knowledge to these topics will fuel students’ argumentation abilities and their mediation skills. Of course, adding reason to disagreement challenges all of us.

With the advent of the Law Academy and the rejuvenation of PHS Debate, I’ve watch argumentation papers become even stronger in AP English Language. Sending Pelham’s young adults into the world with the skills to argue their stance—whether with the spoken or written word—has the potential to share Pelham’s perspective.

Pelham’s kids have matured in an environment of diversity. People who differ from these students in ethnicity, religion, race and socioeconomic status are not theoretical populations; indeed, diversity fills Pelham’s classrooms. Our students have friends who are different from them in fundamental ways. When they speak of what’s right or what’s fair, Pelham students tend to speak for the masses.

“My favorite part of Law Academy is working with new people. I am able to relate and rely on their help,” said Morgan Harris.

Sharing Pelham’s perspective in today’s tumultuous world has the potential to foster peace.