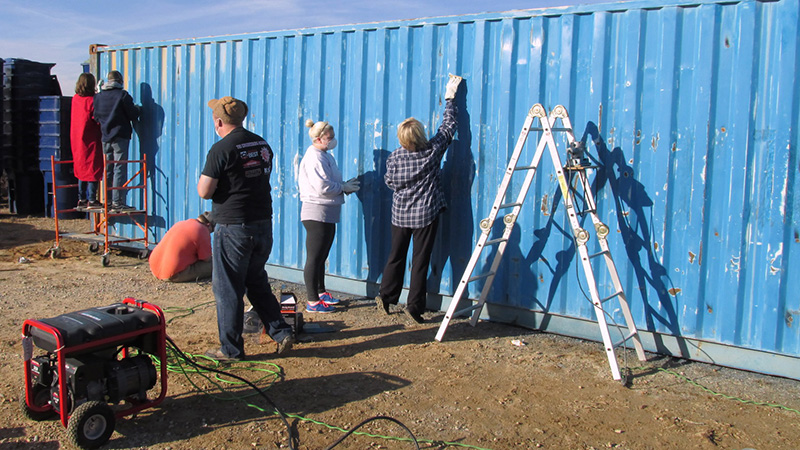 Skilled Knowledgeable Youth volunteers work to paint a large shipping container being transformed into a mobile classroom to send to Honduras. (Contributed/Michael Brooks)

ALABASTER – Thompson High School engineering teacher Brian Copes began taking volunteers to Honduras in 2012 to offer a hand of friendship to her citizens, and work has begun this winter for the June 2018 trip. The group is called SKY for “Skilled Knowledgeable Youth.”

Copes said the idea to found SKY grew after his trips to six continents to do mission work.

“The need is everywhere,” Copes said. “We call this a sister schools project because we’re trying to connect Alabama kids with Honduran kids.”

Copes said all area high schoolers are welcomed to take part in this year’s project—fashioning a vocational classroom from a shipping crate.

“Many Hondurans drop out of school before graduation because classrooms are limited,” Copes said. “They have to take buses to neighboring villages in order to learn. We began to think about a way to provide classrooms.”

Copes and his volunteers found a metal shipping container and determined to transform it into a classroom. The 40-foot long container, donated by Alabama Power, weighs more than 8,000 pounds. Kirkland Wrecker Service moved the crate, Lincoln Electric Company supplied welding assistance and Sherwin Williams donated paint for the project. And the city of Alabaster provided space in Limestone Park for work.

“Mayor (Marty) Handlon and the city have rolled out the red carpet for us,” Copes said. “We’ve had great cooperation from city government.”

And the mayor of Belfate, Honduras, has been encouraging, too, Copes said.

“The mayor is a former educator, and he really believes the way out of poverty is through education,” he said.

This year’s project includes crates prepared by Eufaula High School, Satsuma High School and Bibb County High School. Each crate will have a specific design for its use in the village.

“The crates will be shipped complete to Belfate,” Copes said. “They will have framing, interior walls and electrical wiring. What we’ll have is an instant vocational school.”

The Satsuma High project will be the computer lab that Copes described as the “hub of communication” with the sister school.

“We plan to use Skype or the equivalent and broadcast lessons to Honduras,” he said. “There’s a need for English education, so we can do distance learning with our American English classes. It’s also neat to think about our geography students learning about the rain forest and the Honduran students being right in the middle of it!”

This year’s project is one of several unique things SKY has done for their South American neighbors.

One part of the 2012 trip entailed taking prosthetic limbs to the county.

“These cost $60,000 in America, and the exchange rate is 20-1, so you can see that purchasing them is out of reach for native Hondurans,” Copes said. “However, I challenged students to build them, and we were able to build limbs for around $100 each. This project was so successful that Lt. Gov. Kay Ivey made all our students honorary lieutenant governors!”

It was the 2012 trip that impressed Copes about the need for classroom space. And this need was reinforced in 2014 when he toured a school that had four computers, but only one was in working order, and the school had no Internet.

“In 2016 we did a water chlorination project,” he said. “More people die for contaminated water than any other cause. And we helped dry in some classrooms, installed windows Lowes donated to us and put in a window air conditioner.”

“This is a great way to share,” Petitt said. “We often complain about the things that are wrong in our country, but our worst days are the best days in other places. This project is one way to help others in need.”

Copes’ wife, Angel, and two daughters participated in the work day on Dec. 16.