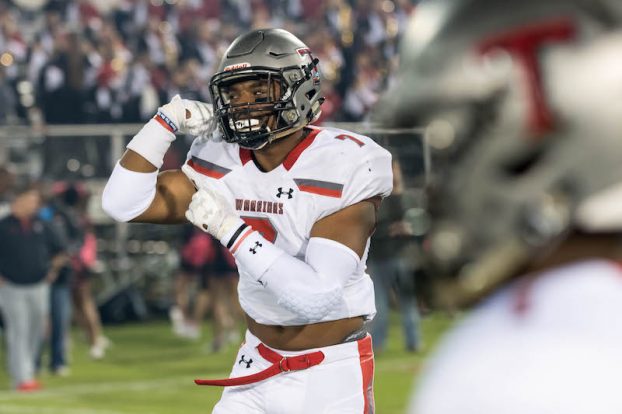 With the loss, Alabama’s record in the series dropped to 22-9 overall and 0-2 in games played at Hattiesburg. Alabama won last year’s game at Cramton Bowl 25-14 and is 5-0 in games played at Montgomery since the classic was moved from Mobile in 2011.

Alabama, coached by Steve Smith of Piedmont, started off strong, scoring on its first possession when Wetumpka’s Kavosiey Smoke scored from the 1 to cap a seven-play, 76-yard march – highlighted by Smoke’s 42-yard run. Evan McPherson of Fort Payne booted the extra point and the visitors led 7-0 with 7:03 left in the first period.

McPherson followed with a successful onside kick recovered by Ramsay’s Starling Thomas, but a 15-yard penalty foiled Alabama’s opportunity.
Mississippi, coached by Lance Mancuso of Jefferson Davis County, tied the game at 3:43 in the quarter following an Alabama fumble at its own 24-yard line, and Kenneth Gainwell of Yazoo County raced 24 yards on the next play for a touchdown. Brandon kicker Scott Goodman’s kick tied the game at 7-7.

Both teams sputtered at times in the second quarter – with Alabama missing on a 51-yard field goal and Mississippi’s 48-yard field-goal try on the last play of the first half coming up a few yards short.

Mississippi took control in the third quarter scoring three touchdowns as Alabama’s offense continued to sputter and a tiring defense that spent too much time on the field.

Quarterback Patrick Shegog of South Panola put Mississippi ahead for good early in the third period with a 3-yard touchdown run. Marcus Murphy of West Point scored from the 2-yard line three minutes later taking advantage of Pearl defensive back Tylan Knight’s interception of Alabama quarterback James Foster’s pass at the 26-yard line as Mississippi took a 21-7 lead. Gainwell scored his second touchdown of the third quarter with 1:32 left in in the period with a 12-yard run.

Gainwell, who finished with 56 yards rushing on nine carries to earn co-MVP honors for Mississippi with Knight, added his third touchdown in the fourth quarter on a 3-yard run.  Murphy, who rushed for a game-high 124 yards on 13 carries, added his second score with 3:53 left on a 25-yard run.

Jalen Rayam, also of Thompson, had a strong day as well posting four total tackles with a half a sack as well.
Smoke led Alabama’s offensive effort with 69 yards on 10 carries. Asa Martin of Austin added 39 on 12 carries and Carlos Davis of Muscle Shoals had 38 on six attempts.

Alabama had 131 yards rushing but was only 10-of-27 passing for 87 yards to finish with 218 yards. Mississippi had 187 rushing, 138 passing and 325 total yards. Each team had eight penalities with Alabama being assessed 55 penalty yards and Mississippi had 59. Both teams had two off-setting penalties as well.

Alabama quarterbacks Jack West of Saraland was 9-of-17 passing for 71 yards and James Foster of Sidney Lanier finished 1-of-10 for 16 yards. Seth Williams of Paul Bryant had three catches for 48 yards and Justyn Ross of Central-Phenix City had one for 19 yards.

Jaquez Jones of Hillcrest-Tuscaloosa also had six tackles and Jamias Presley of Opelika had five. Marese McBride of Daphne also had two tackles for losses among his four stops.